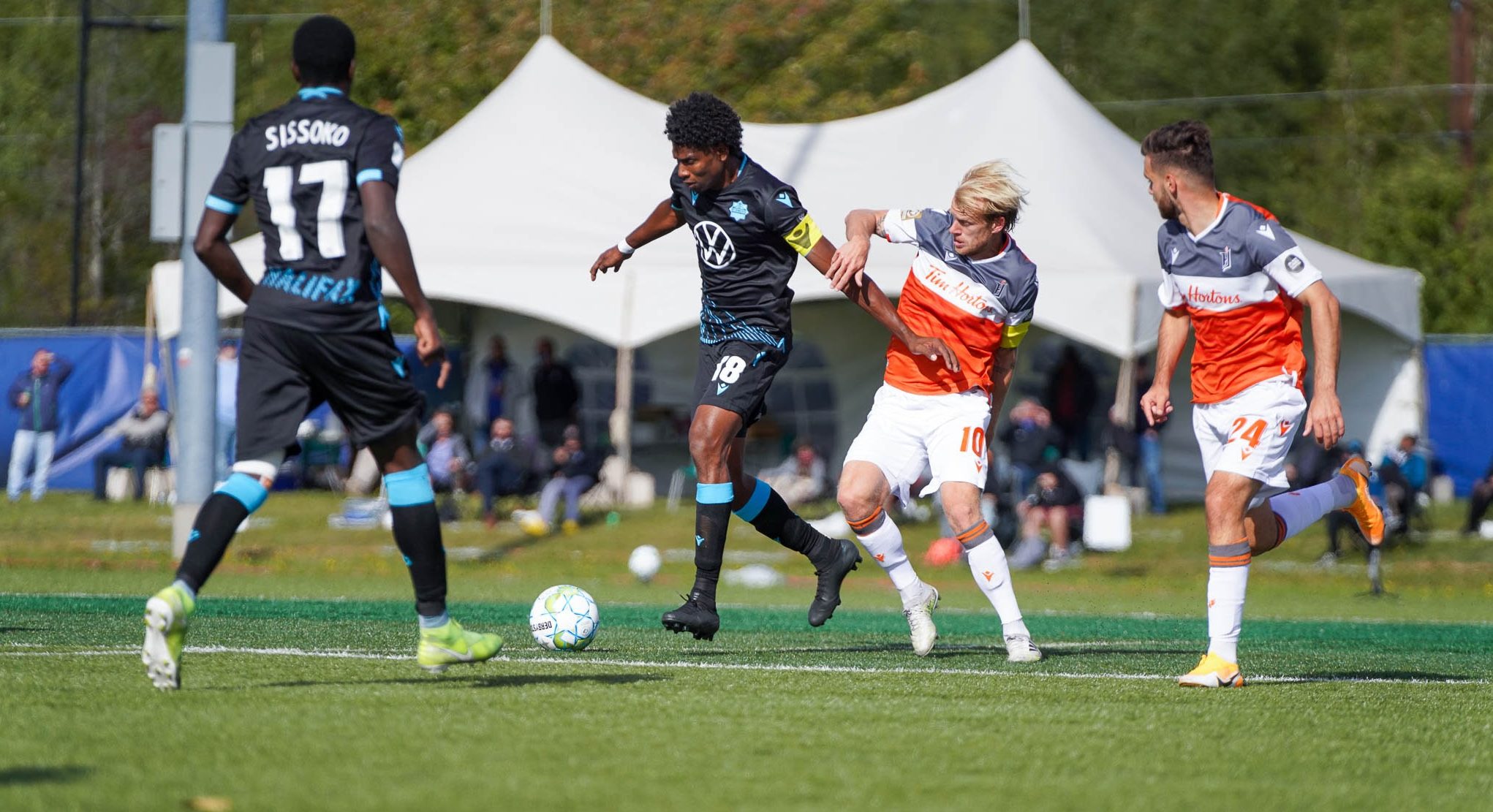 Really, there’s only one set of numbers that mattered on Saturday: Forge FC 2, HFX Wanderers FC 0.

The Hamiltonians conquered the CPL for the second straight year, defeating the Maritimers comprehensively to retain the North Star Shield.

Still, it was a highly entertaining contest, with hard battles, individual quality, and a high level of intensity from both teams.

Although the score speaks to Forge’s dominance on the day, the Wanderers had their moments of pressure, and they certainly did not fold when playing from behind.

All that said, here are a few statistics that stood out from a fantastic grand finale at The Island Games.

Incredibly, Forge managed to go the distance in PEI — 11 games in total — while using a different front three in every single starting lineup. Seriously, they didn’t repeat once.

On Saturday, Bobby Smyrniotis opted to go with Johnny Grant, Mo Babouli, and David Choinière, who all caused plenty of problems for the Wanderers’ backline. Smyrniotis said after the game that he’d hoped Babouli and Choinière could use their skill to operate in the spaces HFX typically leaves between their defenders and midfielders, and it seems that choice paid off.

Four players for Forge won every single duel they went into on Saturday. A total of seven Forge players won every aerial duel.

Of course, a few of those stats look a little less impressive when you see how many they actually encountered (it was just one for Triston Henry), but some of the numbers are remarkable.

Dominic Samuel, for example, playing away from his normal central position at right-back, won an unbelievable 10 duels, five of which were in the air. He also won four fouls, getting the better of opponents in every physical situation.

It was a heck of an afternoon for Mo Babouli. The Forge striker, who fought his way into the starting 11 at this tournament, put in an excellent 80-minute shift in the final. He made four key passes and earned two shots of his own, also providing the perfect second-phase cross to Alexander Achinioti-Jönsson for the goal that won Forge the game.

HFX Wanderers like to play a certain way. That way does not typically involve having the ball a whole lot, or building up slowly.

Unfortunately for them, Forge knew that. They allowed their opponents to have the ball in certain phases, meaning that HFX had more than 50 per cent possession for the first time at The Island Games. As a result, they weren’t able to play the direct, fast-paced style of counter-attacking football that brought them success in previous games.

Another huge part of HFX’s game is winning the ball high up the pitch with their press. They weren’t able to do that on Saturday either, as evidenced by their average possession start height of 25.7 metres.

There you have it – @ForgeFCHamilton are @CPLsoccer's Champions again! 🥇#ForgeFC continued to have an above-average xG per Shot ⚒️@HFXWanderersFC were held to the lowest Avg Possession Start Height, in the tournament, today. Tough break! 😱#CanPL #CCdata pic.twitter.com/GhPsr6H77e

Compared to Forge’s 38.6, that suggests that the Wanderers had to play out of the back a little more, and couldn’t pick off errant passes in the attacking half of the field.

The Island Games are over. They lasted for 37 days, and now we’re left once again without CPL football.

What a tournament it was, though. Kyle Bekker said after the final that he’s likely to look back on this experience very fondly, and it’s hard not to agree with him.