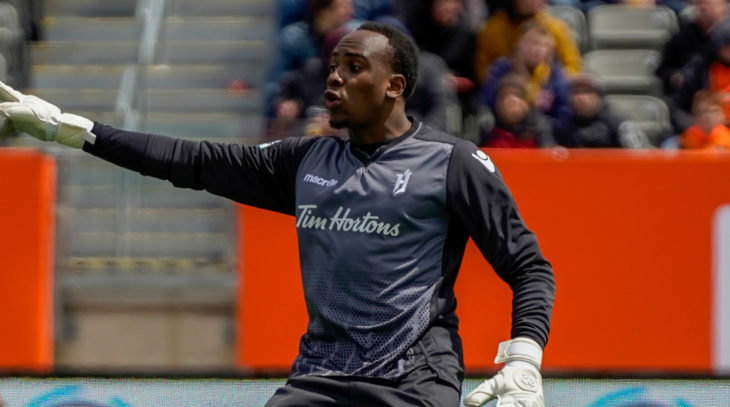 Only one goalkeeper can start a game, but clubs around the world recognize that they need two quality shot-stoppers on their roster at all times.

You never know when your No. 1 ‘keeper is going to go down with an injury, or hit a rough patch of form that he can’t escape, so it behooves teams to have someone waiting in the wings who can take over at a moment’s notice.

Marco Bustos understands this, as after a recent appearance by his new Pacific FC teammates Callum Irving and Nolan Wirth on OneSoccer’s Hangout, he tweeted that they were the “best pair of ‘keepers” in the Canadian Premier League.

It was a pretty bold statement from the Pacific newcomer, and it got us wondering if he was right.

Just who does have the best goalkeeping duo among the CPL’s eight teams?

With this in mind, the CanPL.ca trio of John Molinaro, Marty Thompson, and Charlie O’Connor-Clarke offer their thoughts on who is the league’s best 1-2 goalkeeping punch.

RELATED READING: Callum Irving and Nolan Wirth on OneSoccer Hangout: Battling it out to be Pacific’s No. 1

Having the best goalkeeper in the league as your number one is a pretty good start. Marco Carducci was, of course, almost unbeatable in 2019, with his nine clean sheets. He won the Golden Glove, for good reason, as he backstopped the Cavs to the best defensive record in the CPL.

Carducci couldn’t have done it alone, though. He had an extremely reliable and experienced deputy in Niko Giantsopoulos, who played five league games plus another four in the Canadian Championship.

Giantsopoulos lost just once — that anomalous 3-1 defeat to Pacific FC that closed off the Spring season. He was called into action on occasions when Carducci was away with the Canadian men’s team, and his solid play ensured that the Cavs were still in good hands.

Part of the reason for their success was, of course, the solid team in front of them that ensured neither ‘keeper had to face too many shots per game. That said, Giantsopoulos actually did need to make more saves, on average, in his appearances than Carducci did.

Still, both players were extremely solid in 2019, and the setup that Cavalry has ensures that they’re never particularly worried at the back.

Mixing skill and potential, FC Edmonton has the best two starting ‘keepers in the CPL with Connor James and Dylon Powley.

Leading the pair is Golden Glove-nominated James. He finished third among CPL goalkeepers in the 2019 Volkswagen Premier Performer standings with a score of 75.22 – likely due to his staggering 12 “sweeper keepings” on the season (a league-best). An undersized goalkeeper, he made the best of a difficult situation by rushing out and closing down attackers to bail out a defence that was shaky at times. At just 23 years-old, James has the chance to be one of Canada’s best.

Of course, the key to this argument lies with Powley – who made only eight appearances for FCE in Year 1 and didn’t have much of a pro career before that.

But, if you were watching, 2019 was a breakout year for FCE’s no. 2, who made 21 saves and registered one clean sheet in CPL action. He’s criminally underrated, especially when it comes to distribution – Powley completed more long passes than any CPL ‘keeper per 90 minutes (7.61) in 2019. That on-the-ball skill earned Powley a rare Premier Performer of the Week nod in late July.

Those performances also brought interest from other CPL clubs. He has aspirations and expectations of being a no. 1 ‘keeper, too, so much so that he tried his luck elsewhere this off-season.

Powley brings his own set of skills and the ability to challenge James for the no. 1 spot. Plus, the tandem are both under 24, giving Jeff Paulus reason to think these ‘keepers will remain in FCE blue for years to come.

Triston Henry and David Monsalve haven’t played together yet – Monsalve only signed with Forge this off-season and the COVID-19 pandemic halted the start of the CPL season – so we’re only left to our imaginations as to how they’ll complement each other and work together.

On paper, though, you have to like the looks of Forge’s goalkeeping duo.

Henry, 26, was one of the league’s most unheralded players from the 2019 season, his first as a professional. He beat out Quillan Roberts for the starting job in Hamilton, and then proceeded to collect a league-leading nine clean sheets (tied with Marco Carducci) and finish fifth in saves among all goalkeepers. Oh, he also backstopped his team to a pair of shutout wins in Finals 2019 as Forge hoisted the North Star Shield. Tell me again why he wasn’t even nominated for the Golden Glove Award?

As for Monsalve, the 31-year-old ‘keeper joined Forge in March, giving the Hamilton-based club a wealth of experience between the posts. Aside from representing Canada at both youth and senior level, Monsalve has travelled the world during his pro career, with stops in Finland, Sweden, Colombia, Guatemala, League1 Ontario (with Vaughan Azzurri), the NASL (FC Edmonton) and the USL (Ottawa Fury).

Monsalve is eager to prove himself in the CPL after spending the bulk of his club career playing abroad, and you have to think with his experience he’ll rise to the occasion should Henry falter and he’s called into action by Bobby Smyrniotis.