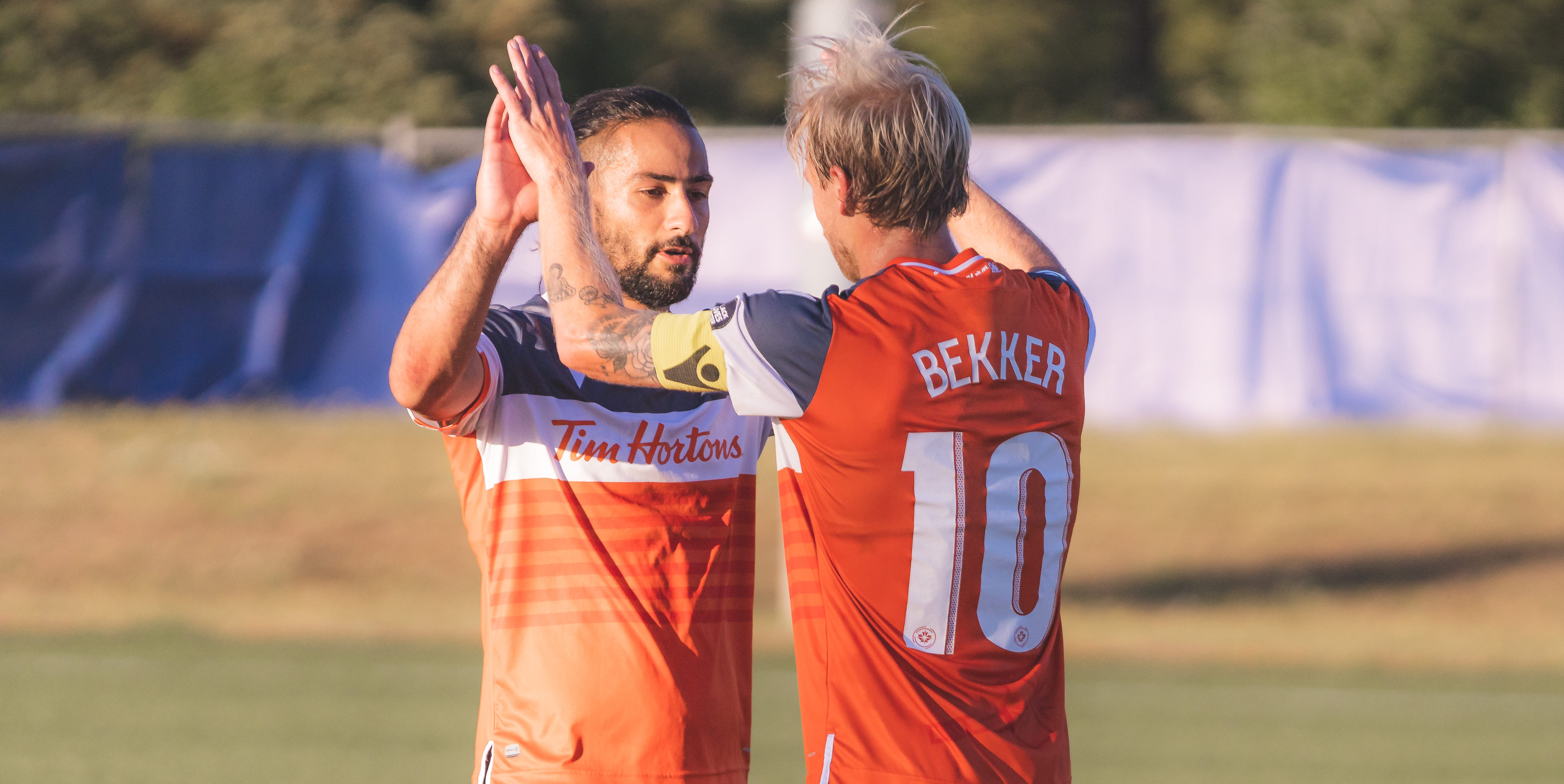 The 2020 season, truncated as it was by the COVID-19 pandemic, proved that Forge FC are unquestionably the CPL’s gold standard, as Bobby Smyrniotis’ Hamilton-based side rolled smoothly through The Island Games before embarking on an incredible continental campaign through the Concacaf League.

Technically, the work isn’t quite done for Forge in this season, with the Canadian Championship final still set to be played in early 2021, but nonetheless there’s plenty to reflect upon after an incredible 2020 for the two-time Canadian Premier League champions.

The story of the season

The year 2020 began with questions for Forge FC. After winning the 2019 CPL title, they entered the new year wondering if they’d be able to do it again — and this time, without reigning Player of the Year and Golden Boot winner Tristan Borges.

For the most part, Forge looked set to stay the course for 2020, without much roster turnover aside from Borges’ departure and a few depth pieces moving on. Through the lockdown period, they made just one signing, bringing on Belgian midfielder Paolo Sabak. Once The Island Games became a reality, a few more fresh faces joined the squad, as key contributors such as Mo Babouli, Maxim Tissot, and Jordan Dunstan signed on.

With other CPL teams seemingly in an arms race around them, Forge’s relatively quiet off-season may have caused some to overlook the reigning champions heading into the season. Nonetheless, they set off for Prince Edward Island with one goal in mind: defending their trophy.

“Give me the route to a trophy and I’ll find the best way to get there,” Bobby Smyrniotis said.

That route began with a Finals 2019 rematch against Cavalry FC to officially open The Island Games. As always with those two teams, the game was not without excitement — nor controversy. After recovering from an early set-piece lapse to take a 2-1 lead (courtesy of superb goals from Anthony Novak and Kyle Bekker), Cavalry won a last-minute penalty (or rather, “not a penalty,” if you asked Smyrniotis) from a contentious handball decision, and the sides had to split the points.

Forge went on to take down FC Edmonton next, courtesy of a Kwame Awuah wonder-goal (Jeff Paulus’ words, not ours) and a late Eddies own-goal, before dropping points in a close-fought draw with HFX Wanderers. Smyrniotis wasn’t too worried about it, though, nor was he particularly concerned about fatigue setting in after three games in quick succession to start August.

He wasn’t wrong; one 2-1 victory over Pacific FC later, and Forge were riding high at the top of the CPL standings. That contest was one of the best of the whole tournament, with the two sides combining for 35 shots between them, and Bekker providing the 97th-minute winner to add some drama to the nationally-televised match. Smyrniotis was particularly happy with this one, making a point of explaining how important the game could be.

“I think the greater community of soccer fans was able to watch this, they’re able to see the quality of this league,” he told CanPL.ca that afternoon. “I think it was a fantastic game between two teams that play soccer, put the ball down. When you just look at the quality of play in the game, it was a great game to be broadcast across the country.”

The next game wasn’t so rosy, with York9 FC putting three set-pieces past the defending champions en route to a surprise 3-2 win (the only loss Forge would suffer in PEI). They’d bounce back, though; a 2-0 win over Atlético Ottawa meant they were in pole position for the top four heading into their seventh match of round one.

Thanks to their opening-night fixture with Cavalry, Forge had the luxury of a full week off before their last match against Valour FC, and with midweek results falling the right way for them, the Hamiltonians found themselves guaranteed of a spot in the second round before taking the pitch. Despite heavy squad rotation, Forge still pulled out a 2-2 draw against a desperate Valour side, and so rolled into the group stage.

In game one of the second round, Forge fought tooth-and-nail with the much-improved HFX Wanderers once more, and this time they were the ones profiting from a controversial penalty decision. Still, they out-shot and out-possessed the Wanderers en route to a 1-1 draw and a valuable point.

From there, they’d go on to dominate Pacific for a 2-0 win, which all but ensured their place in the CPL Final. They’d punch their ticket officially later that week with a 1-0 win over Cavalry, Bekker managing to break the Cavs’ press early and find Babouli for the goal they needed. In doing so, they also clinched an appearance in the Final for HFX Wanderers, setting up a fascinating championship game between the two sides that couldn’t be separated in either meeting so far in 2020.

The final went almost perfectly to plan for Smyrniotis and his side. They caught the Wanderers by surprise, ceding more possession than their opponents wanted, and finally taking control in the second half with an Alexander Achinioti-Jonsson goal off a corner and a Maxim Tissot insurance marker in the 90th minute (with a little help from the wind, and a handling error by HFX ‘keeper Christian Oxner).

It ended 2-0, bringing to a close 37 days of intense competition in PEI. Really, CPL soccer is a simple game: twenty-two men chase a ball for 90 minutes, and in the end, Forge FC wins. Remarkably, they did it in 2020 while fielding a unique front three in all 11 Island Games matches.

He added: “Being able to come out as champions after a unique event is a great story for every person that’s involved in our club for this year — for not only now but 10 years down the road, to be able to tell this story.”

Unlike the other seven CPL sides, though, the end of The Island Games was not the end of the story for Forge. Thanks to their 2019 CPL title, they still had the Concacaf League to worry about in the Fall. So, after returning from the CPL bubble, the champions set about training at Tim Hortons Field in preparation for a trip down to El Salvador, where they’d play C.D. Municipal Limeño to open the international chapter of 2020.

Taking on Limeño in the sweltering humidity of Estadio Cuscatlán, Forge certainly gave fans something to cherish. David Choinière scored early, but a first-half equalizer and a red card to Jonathan Grant left them fighting it out down the stretch. Anthony Novak was the hero this time; not long after entering as a substitute, he took a sublime touch from a long pass into the box and fired it into the net, granting Forge the 85th-minute winner they needed.

The Hamiltonians went straight to Panama, where they met Tauro FC in the round of 16 — a tougher challenge than Limeño, certainly. Yet again, though, they were up to the task; although Babouli’s 11th-minute goal was cancelled out by an 18th-minute equalizer, they went toe-to-toe with the tournament’s top seed for 90 minutes. Finally, on the brink of full time with a penalty shootout looming, a Novak run into the box prompted a harsh tackle and a penalty kick. Daniel Krutzen obliged, and Forge completed the upset in regular time. The CPLers soldiered on.

Forge returned to Canada for a 14-day quarantine before heading south to the Dominican Republic, where they’d play quarter-final opponents Arcahaie FC of Haiti with a spot in the Concacaf Champions League on the line. While preparing for that clash, they received some good news from back home: Bekker was named the CPL’s Player of the Year, and Triston Henry was the league’s top goalkeeper for 2020.

The quarter-final contest wasn’t quite as happy for the Canadian side; although they took an early lead thanks to a Krutzen penalty kick, a second-half mistake by Henry let Arcahaie back into the game. Despite dominating possession and firing chance after chance at the Haitians, Forge couldn’t find another goal, and they bowed out of the Concacaf League in a penalty shootout.

Forge closed the book on 2020 with one last shot at the Champions League, in a play-in game against Honduran side C.D. Marathón. Although they fought well against an extremely tough side yet again (probably outplaying them, in many ways), they never recovered from a first-half goal as chance after chance failed to find the net. So, their international odyssey ended in defeat, with both Bekker and Smyrniotis earning red cards against a frustratingly cynical opponent.

With the end of 2020 also came the end of a Forge (and Canadian soccer) veteran’s time in the game; before the Arcahaie match, David Edgar announced that he’d be retiring at the end of the year after a long, successful career. Although he and his side couldn’t pull out the win at the end, Edgar affirmed in his final press conference that he’s proud of what Forge did in 2020.

“We played football till the bitter end — played the game as I’d want it,” he said, tearing up a little. “These boys have learned the lesson because nothing’s given to you down here. It went exactly as expected — no surprises. What can I say — so proud of the way the boys handled it, stuck up for themselves and got stuck in… and it was good old-fashioned ding-dong.”

The mystery of what exactly a “good old-fashioned ding-dong” remains unsolved, but regardless, Forge will have to look back on 2020 as a success. They won a CPL championship in gruelling conditions (Smyrniotis called it the hardest footballing experience his players might ever face), and they travelled to Central America and won — twice.

At the end of it all, Forge FC remain at the top of the CPL world.

Goal of the Season

Kwame Awuah with the first 💥 goal from distance at the 2020 CPL #IslandGames on Prince Edward Island pic.twitter.com/CCkaSTEYFH

Although tested by an improved field of CPL opponents, Forge was still unquestionably the top dog in 2020. Here’s how their season looked, by the numbers:

“Don’t let people fool you that coaches have a magic wand. We try and move things around a little bit, but (the players) have to come up with the solutions.” – Forge FC coach Bobby Smyrniotis

“It wasn’t easy, I’m not gonna lie. It’s not easy to play a game every three days for 40 days, whatever it was we did. Honestly I can’t say it enough, it’s a credit to every single one of the guys, all 22 of us who had to put their head down and go for us to achieve this.” – Forge FC captain Kyle Bekker on winning the CPL championship

“We love this sport. We love being out here representing our club, and doing it in Concacaf. The respect we’ve gained in this region is tremendous over this last two years, the competitive nature of these games has been fantastic.” – Bobby Smyrniotis on Forge’s win vs. Tauro FC

Your photo of the year