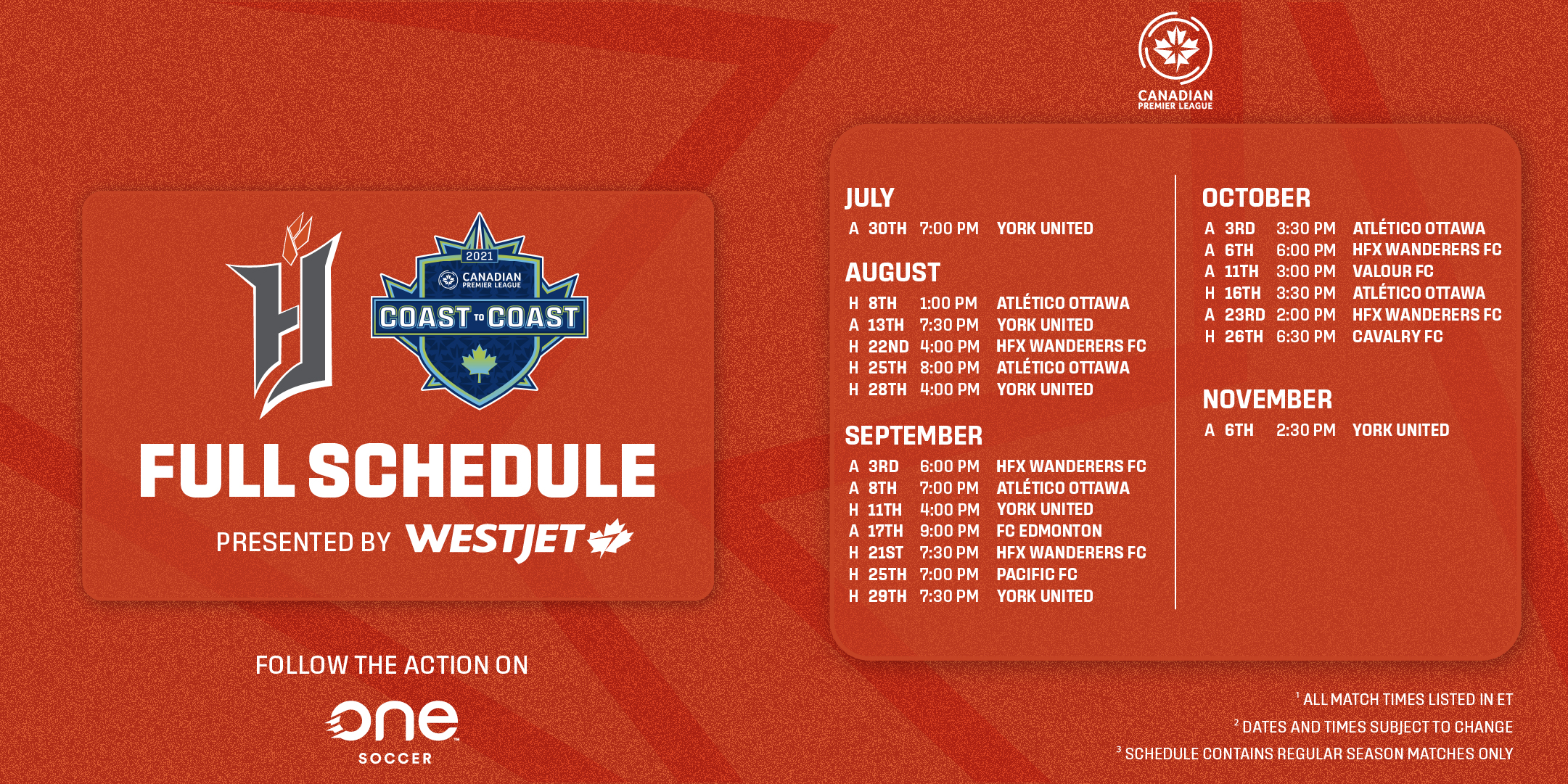 The Canadian Premier League announced Monday the remainder of the 2021 regular season schedule presented by WestJet. The 2021 CPL season has all eight Clubs playing a 112-match season with 28 matches per Club in a single table format. The season began on Saturday, June 26 in Winnipeg, Manitoba with The Kickoff Presented by Volkswagen with each club playing eight matches (32 games total).

Upon completion of The Kickoff on July 24, Clubs will return to their home markets to continue the season where they will play an unbalanced schedule – 16 games against teams in their region and four more against teams they already played against in Winnipeg. All matches will be broadcast exclusively via the CPL’s media partner, OneSoccer.

Home market matches will start July 30, 2021, and end on November 6, 2021, with each Club playing their remaining 20 matches. Forge FC’s first match after The Kickoff games will be Friday, July 30 at York United at 7 p.m. Forge will host Atlético Ottawa on Sunday, August 8 at 1 p.m. at Tim Hortons Field in the club’s first CPL match back in Hamilton. However, Forge FC’s first game at Tim Hortons Field is scheduled for Wednesday, August 4 at 8 p.m. in the first leg of its 2021 Scotiabank Concacaf League Preliminary Round matchup against Club Deportivo Futbolistas Asociados Santanecos (C.D. FAS).

“We are extremely thankful for the unwavering support and patience of our great fans and supporters, and our players can’t wait to return to Hamilton and play in front of our home crowds again at Tim Hortons Field,” said Matt Afinec, President and Chief Operating Officer of Forge FC. “We are also very excited to formally celebrate our back-to-back CPL championships by unveiling the recognition of those amazing achievements prior to kickoff of our CPL home opener on August 8.”

“Like our fans and supporters, we are all eager and excited to return to our home markets and play in front of fans, including being able to celebrate with our Ottawa fans as Atlético has their inaugural match at TD Place on August 14,” said David Clanachan, Commissioner Canadian Premier League. “The future is bright as we prepare to open our stadiums and get back to a regular schedule that allows our players, coaches, officials and staff to be at home with their families and friends. I want to thank everyone who is in the bubble in Winnipeg for their commitment and devotion to this beautiful game so many of us love. Thank you to our fans and supporters for your continued support and we look forward to seeing you cheering on your favourite Club at their home field.”

Or fans can try a Forge FC Freedom Pack! Starting at just $20/ticket voucher, the Forge FC Freedom Pack gives you the flexibility and savings you’ve been looking for. 20 ticket vouchers to Forge FC home matches that can be used any way you want. Bring 10 people to 2 matches, or go to 10 matches with a friend. The possibilities are endless! Click here for more information on Forge FC freedom packs.

About the Canadian Premier League
Canadian Premier League (CPL) is Canada’s Tier 1 professional men’s soccer league that debuted on April 27, 2019. Playing in world-class and unique venues, and partnering with strong community-led ownership groups, the CPL is a league for Canadians by Canadians that brings professional soccer to communities coast-to-coast. For updates and more information, please visit CanPL.ca or connect on Twitter: @CPLsoccer and #CanPL