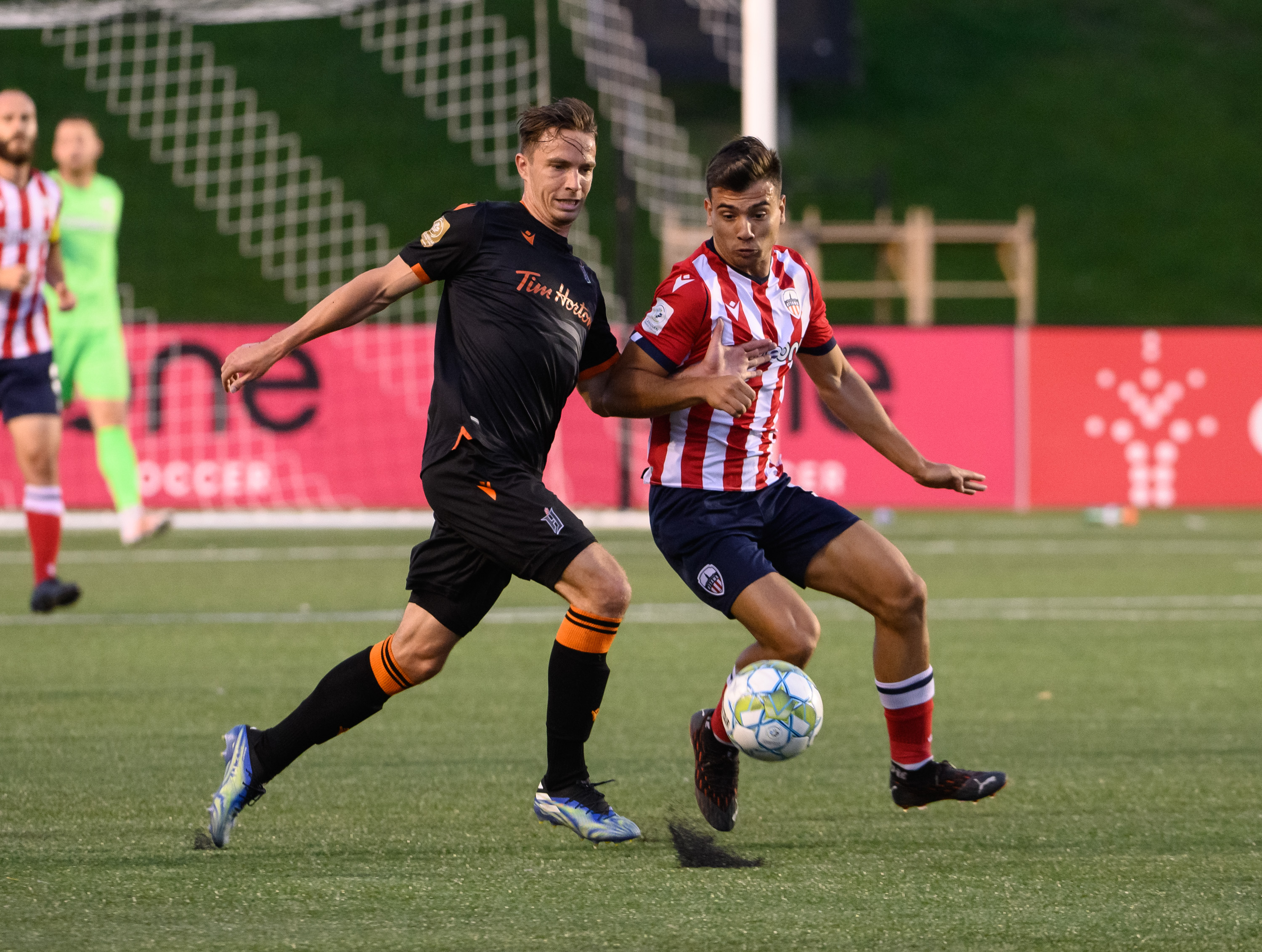 Woobens Pacius scored the winner for Forge FC, slotting the ball past Dylan Powley in the 65th minute after a brilliant pass over the top from Elimane Cissé. Triston Henry made four stops at the other end of the pitch as well in a strong all-around team performance from the defending champions.

The home side remain at the bottom of the table, four points back of FC Edmonton in seventh, while Forge remain in third place, six ahead of fourth-placed Valour FC.

Wednesday’s match was a milestone one for the Canadian Premier League, as it was the 200th game in league history.

Featuring the league’s back-to-back champions, and the newest CPL club in Canada’s capital, it was Forge who came away with three points, thanks to Woobens Pacius’ second-half winner.

Someone who knows a lot about winning in the CPL is Forge head coach Bobby Smyrniotis, who has led his side to back-to-back North Star Shields, and has his side in a strong position to reach the playoffs again in 2021. Smyrniotis also coached the first game in CPL history, a 1-1 draw with York9, as York United were then known, at Tim Hortons Field in 2019, and took a moment to reflect on the milestone after his side’s match on Wednesday.

“So much has happened since game #1. We’ve seen a lot of growth in the league,” said Smyrniotis after the match. “We’re all happy with the product on the pitch, week in and week out there’s quality matches being played across this country. There’s great opportunities for younger players, quality players who have been playing pro for many years, and I think that’s the beauty of this league.

Ottawa get into good positions, but are unable to take advantage

Atlético Ottawa have struggled all season with creating goalscoring chances, and then taking advantage of those opportunities when they get them, and that was no different on Wednesday night.

The team had nine shots against Forge, four of them on target, but all of them were turned away from Forge goalkeeper Triston Henry. Alberto Soto also came close late in the match, after he picked up the rebound from a Malcom Shaw free kick that Henry pushed aside. Soto came into the box from a tight angle and struck the ball, but it was blocked out of bounds for a corner kick.

Rafael Nunez also came agonizingly close to scoring at the start of the second half, firing a free kick onto the top of the crossbar. It beat Henry, but didn’t dip enough to find the top corner.

Finishing chances isn’t something that can really be trained, according to Ottawa attacker Malcolm Shaw, but comes with regularly creating them, and sometimes some good luck.

“With us right now it’s small, minute things that are turning out to be very costly, whether it be defensively or offensively,” said Shaw after the match. “Whether it be a lack of concentration on the defensive side of the ball that leads to a goal, or offensively maybe not being clinical enough on some chances, or a lack of focus or whatnot. It’s nothing major, it’s just small things that are costing us.

“It’s just something we’ve got to fix, it’s not something you can train and grind week in and week out. Come matchday, you’ve just got to lock in mentally and really focus to limit the errors.”

They played in a back three again, with Alexander Achinioti-Jönsson in the middle of Daniel Krutzen and Dominic Samuel, and Garven Metusala and Jonathan Grant playing as left and right wingbacks, respectively.

They were defensively solid, mostly limiting Ottawa to shots from set pieces and low-quality areas like tight angles. It was also their third clean sheet win over Ottawa this season, having also beat them 2-0 and 4-0 earlier in the campaign.

One of the best defenders the CPL has ever seen, Daniel Krutzen has been in great form since returning from injury on August 22. The Belgian centre-back led his side in both attempted and completed passes (making 84 of 101), as well as interceptions (four) and aerial duels won (three of three).

Krutzen also had three shots, including an early header which he knocked wide, and a late shot from a set piece that just missed the target. It was another strong performance from Krutzen, who is continuing to get back into good form following the aforementioned injury, according to Bobby Smyrniotis.

“He’s coming into proper match fitness, he was kind of rushed into things with some injuries, so we protected him in the way he was playing,” said Smyrniotis after the match. “I think he’s becoming more comfortable out there, just getting his legs, and that’s the biggest thing.

“The football component, the technical component, the intelligence, the tactical savviness he has is great. It’s just a matter of his fitness, and we’re seeing that game after game getting better. He’s a guy that controls things, both on the defensive end but also in our ball circulation and the way we want to move up the pitch.”

The Forge FC midfielder was involved on both sides of the ball throughout the match, and set up the winning goal with a brilliant pass over the top to Woobens Pacius.

Atlético Ottawa are back at home on Saturday, September 11, taking on HFX Wanderers (1:30 pm ET/ 2:30 pm AT). Forge head back home to Hamilton for a 905 Derby with York United later that day (4 pm ET). Watch all matches live on OneSoccer.