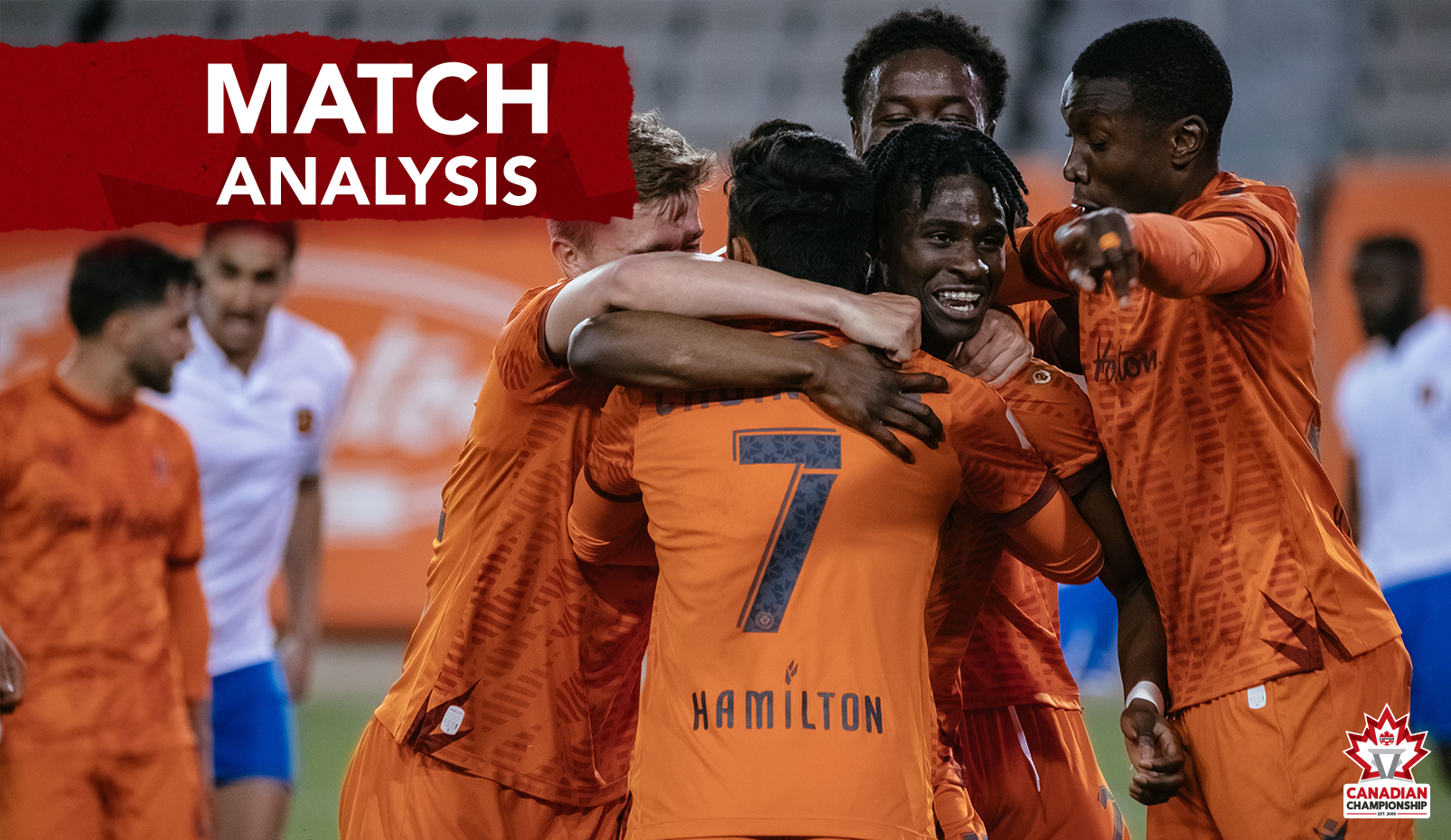 Forge FC defeated CS Mont-Royal Outremont 2-0 to advance to the Canadian Championship quarterfinals and book a meeting with the same CF Montréal side that eliminated them from last year’s tournament in a heartbreaking fashion. Terran Campbell scored a well-placed header in the first half, while birthday boy Woobens Pacius added a late insurance marker.

Despite the loss, Mont-Royal Outremont frustrated Forge over the course of 90 minutes, especially in the second half where they limited the Hamilton side to just two shots on target.

With Morgan returning, Forge change up their system

With Ashtone Morgan returning to the Forge lineup, Bobby Smyrniotis tweaked his system, moving a couple of players into their more natural positions.

Aboubacar Sissoko, who has mostly played as a fullback since joining Forge because of injuries or absences, played in a midfield double-pivot with Alessandro Hojabrpour that helped the Hamilton outfit dictate the middle of the park. Sissoko won possession a stunning 11 times, including twice in the final third, and won 13 of the 20 duels he contested.

Tristan Borges, who has mostly been deployed as a winger this season, played centrally in the number 10 position. He struggled a little bit to influence the match from this position, as Forge found most of its attacking joy out wide.

Here is a quick look at the average positions of Forge players during the match. Morgan (3) and Nanco (11) were allowed to push far up the pitch while Forge played a back three, with Borges (19) free to create in the centre of the park.

“We wanted to do something a little bit different that maybe they wouldn’t be used to” explained Smyrniotis. “When we look across PLSQ and League1 Ontario and those leagues with the way players move, we tried to put players in a lot of the half-spaces and half-areas between them. Just knowing that we had to be a little bit different with the way we were going after their low block.”

In his return to action, Morgan was excellent on the left flank. It was his pinpoint cross that assisted on the opening goal, while he also made three successful tackles in 63 minutes of action.

A chance at redemption awaits against CF Montréal

Forge FC players and staff made it clear in the lead-up to this match that looking past Mont-Royal Outremont would be to their detriment. But one look at the bracket when it was announced, and the prospect of Forge getting a rematch with CF Montréal certainly had to be on their minds.

Forge gave the eventual 2021 champs all they could handle in the semi-finals, ultimately falling in the 11th round of penalty kicks when goalkeeper Triston Henry saw his spot-kick stopped. Now, they will get another chance to exact a measure of revenge when they travel to Stade Saputo in two weeks for the quarter-finals.

“We are really happy to play CF Montréal,” said Forge striker, and Québec native, Woobens Pacius. “It is always nice to play a team from MLS, as we see last year we were close to winning that game. I think this year we want revenge and for us being from Montréal, from Québec it is always something special for a few of us who were there in the [CF Montréal] academy.”

With that being said, Smyrniotis was quick to point out that they have a pair of matches, including a tricky game at home against Atlético Ottawa, before they can start to worry about Montréal. With just one win in the league so far, Forge won’t be looking past any matches right now.

“We definitely didn’t look past [tonight’s match] because this was an oh-so tough one,” said Smyrniotis. “They are tough matches to play against a team that came in here, did a great job in sitting in their block and working hard to make it very difficult for us.”

Forge was unquestionably the deserved winner on the night by whatever metric comes to mind. They had more of the ball by a significant margin (66% possession), more chances (1.68 to 0.21 xG), more shots on target (6-2), and the list goes on.

But before Pacius put the match away in injury time, it hung on the balance of a single goal and that was a little concerning for a Forge side that has been known for its offensive ruthlessness over the years. While they did plenty well at getting the ball into the final third, they struggled a bit with ideas once they got there against Outremont’s low block.

Forge’s pass accuracy dropped to 65.9% in the final third, and the goals they scored were the only two big chances they created during the match. Attacking movements often felt disconnected, especially when they tried to attack centrally.

“We have a way of doing things and that’s always going to bring us challenges, you are asking for players to constantly make decisions to not allow the opponent to make those decisions for you,” said Smyrniotis. “I think that needs rhythm, that needs games, and maybe that game we missed with Valour a couple of weeks ago and that maybe throws you off. That’s why I always like games every few days. So I got another one in 48 hours.”

But speaking of rhythm, one positive is the fact that Pacius has opened his account for the season. The Forge striker, who turned 21 today, tied Mo Babouli for the team lead with seven goals last season. However, before scoring tonight he had been rather wasteful with his chances so far this year.

“It is important for a striker to score goals, the beginning of the season was a little bit tough,” said Pacius. “But now that I scored that goal I should just move forward from that and score more goals, and get my rhythm.”

Sissoko finally got to play in his natural defensive midfield position and made the most of the opportunity. He had 13 passes into the final third and absolutely dominated the midfield physically, an area of the pitch where Outremont completed just 34.3% of their passes. In large part, this was being many were rushed or intercepted by Sissoko.

As aforementioned, the win sees Forge advance to the competition’s quarterfinals, where they will play CF Montréal at Stade Saputo. In Canadian Premier League action, they host Atlético Ottawa on Saturday, May 14 at 4:00 p.m. ET.

Watch all matches live on OneSoccer. In addition to its website and app, OneSoccer is now available on TELUS channel 980 and on Fubo TV. Call your local cable provider to ask for OneSoccer today.