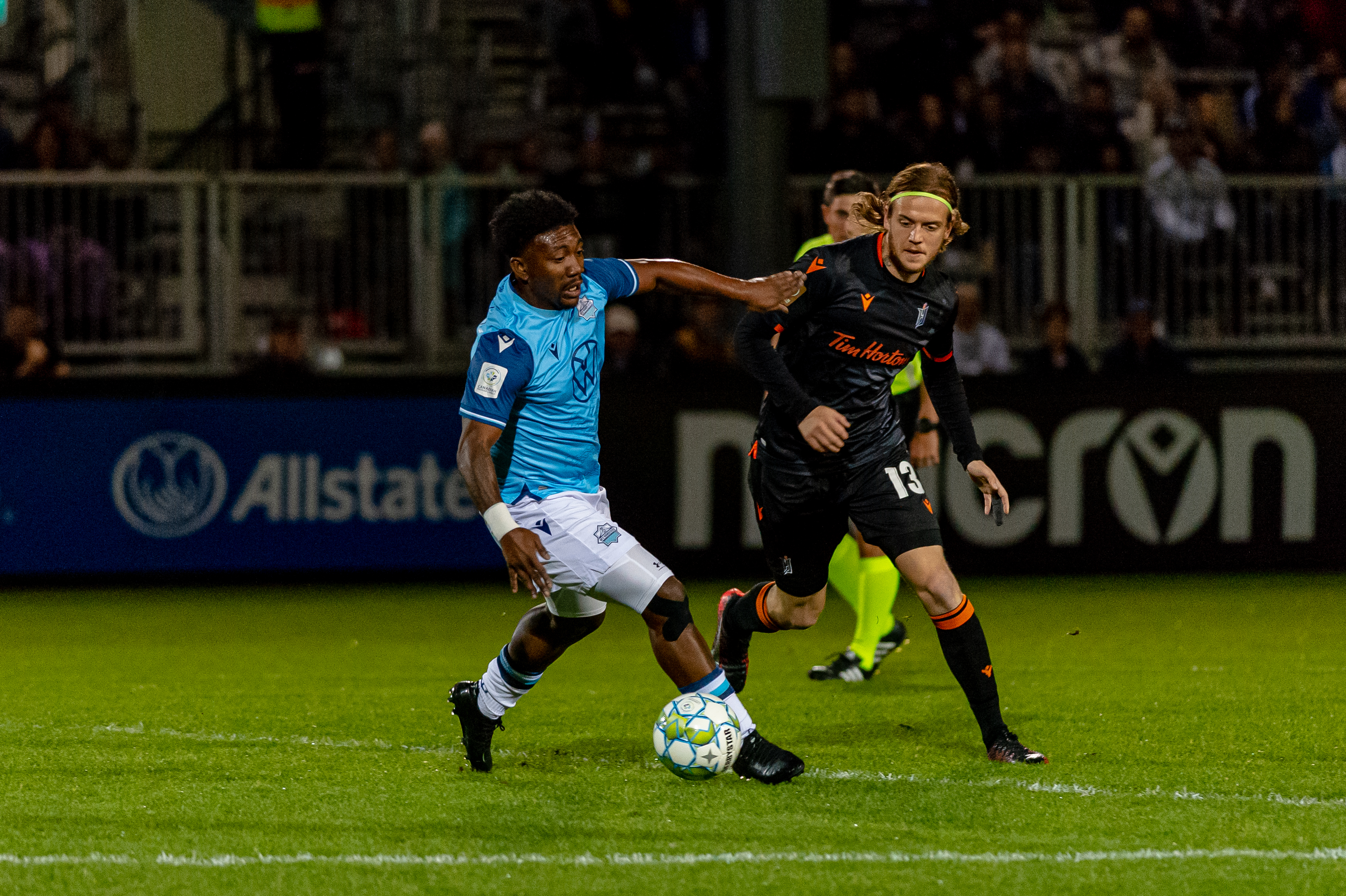 Forge FC won a match at Wanderers Grounds for the first time on Wednesday night, beating HFX Wanderers 1-0 on a first half goal from Mo Babouli. The Canadian striker was in the right place at the right time in the 25th minute, as goalkeeper Kieran Baskett was unable to keep hold of the ball in front of goal, allowing Babouli to slide the ball backwards into the net from a yard out. The Wanderers pushed hard for an equalizer in the second half, but it would never come, as Forge jumped into second place with the road victory.

Third clean sheet in a row for in-form Hammers backline

Forge FC have been dominant defensively of late, conceding just once in their last five matches. In that stretch they’ve beaten Atletico Ottawa and HFX Wanderers (on Wednesday night) on the road in CPL action, defeated Panamanian side Independiente 2-0 over two legs in Concacaf League action, and downed league-leaders Pacific FC 2-1 at home — the one time they’ve conceded.

They have clean sheets in three straight games now, as their defensive unit continues to thrive, despite a couple of injuries. Dejan Jakovic has been out for most of the season, and Maxim Tissot has missed time as well, but the players they do have available to them are in good form.

On Wednesday, they played a back three of Jonathan Grant, Daniel Krutzen and Dominic Samuel. Kwame Awuah was positioned on the left side of midfield, and dropped back a bit into a back five when Forge didn’t have the ball. He moved to the left, Grant pushed out to the right, and Alexander Achinioti-Jönsson would drop centrally in the middle of the centre-backs.

That formula has worked wonders for Forge in recent times, brought about by injuries to Forge defenders that forced Achinioti-Jönsson to play centre-back for a while. It was a blessing in disguise, and allows Forge to unlock a whole new dimension to their game, and dictate everything that happens in front of them.

“The best way to defend is to make sure you control the tempo of the game,” said Forge head coach Bobby Smyrniotis after the match. “That allows you to press and counter-press certain areas of the pitch, and I think that’s important for us and something we’ve done well over the last couple of games.

“We know our defensive unit is tops. You look at a guy like Dom Samuel, who doesn’t get enough credit. For two-and-a-half, close to three, years now he’s the best defender when you look at pure defending that we have in this league. There’s a reason our defending is very solid, there’s a reason for the clean sheets. It’s a collective, but a couple of these guys at the back are doing a great job.”

Gagnon-Laparé steps in again at left back

Deployed at left back (instead of his usual midfield role) in recent weeks due to a couple of injuries in the squad, Jérémy Gagnon-Laparé hasn’t looked out of place at all.

On Wednesday, he led HFX Wanderers in key passes and good crosses on the attacking side of the ball, also making four tackles and a pair of interceptions. His eye for a pass gives him an offensive advantage down the left side, especially if he cuts inside a little bit where he has better angles to play passes along the ground, and has adjusted well to the role defensively.

“He’s doing a job for us,” said Wanderers head coach Stephen Hart after the match. “All credit to him, he’s done well, he’s created a lot of chances from that position.

“I know he will do anything for the team, and that’s what he’s doing at the moment.”

Forge only trail Pacific by two points, as the race for home playoff games heats up. The top two sides will host a playoff game, which would be a big advantage for any team looking to book their spot in the 2021 final.

“I think the biggest focus just has to be three points at a time,” said Smyrniotis after the match. “[We] don’t get too carried away with the standings, what people are doing. The games are quick, everything moves very quickly in one direction or the other. We’ll do the tally at the end and see where we are, but I think we’re in a good spot right now.”

HFX, on the other hand, missed an opportunity to jump over York United for the fourth and final playoff spot. A draw would’ve seen them move equal on points with The Nine Stripes, and a win would’ve given themselves a two-point advantage, but instead they remain a point back, with York also having a game in hand.

York play that game on Friday, as they host Atletico Ottawa with a chance to create a bit of a gap.

“I think there’s still a lot of games left,” said Wanderers midfielder Pierre Lamothe after the game. “Our season doesn’t end tonight, so it’s a disappointing result but we’ll keep going because it’s not done.”

The Wanderers have six games left, including two more against Forge FC. First, they must turn their attention to Monday afternoon, as league leaders Pacific FC come to town.

Another strong defensive performance from Alexander Achinioti-Jönsson and the Forge defensive unit earned them their third clean sheet in a row in all competitions.