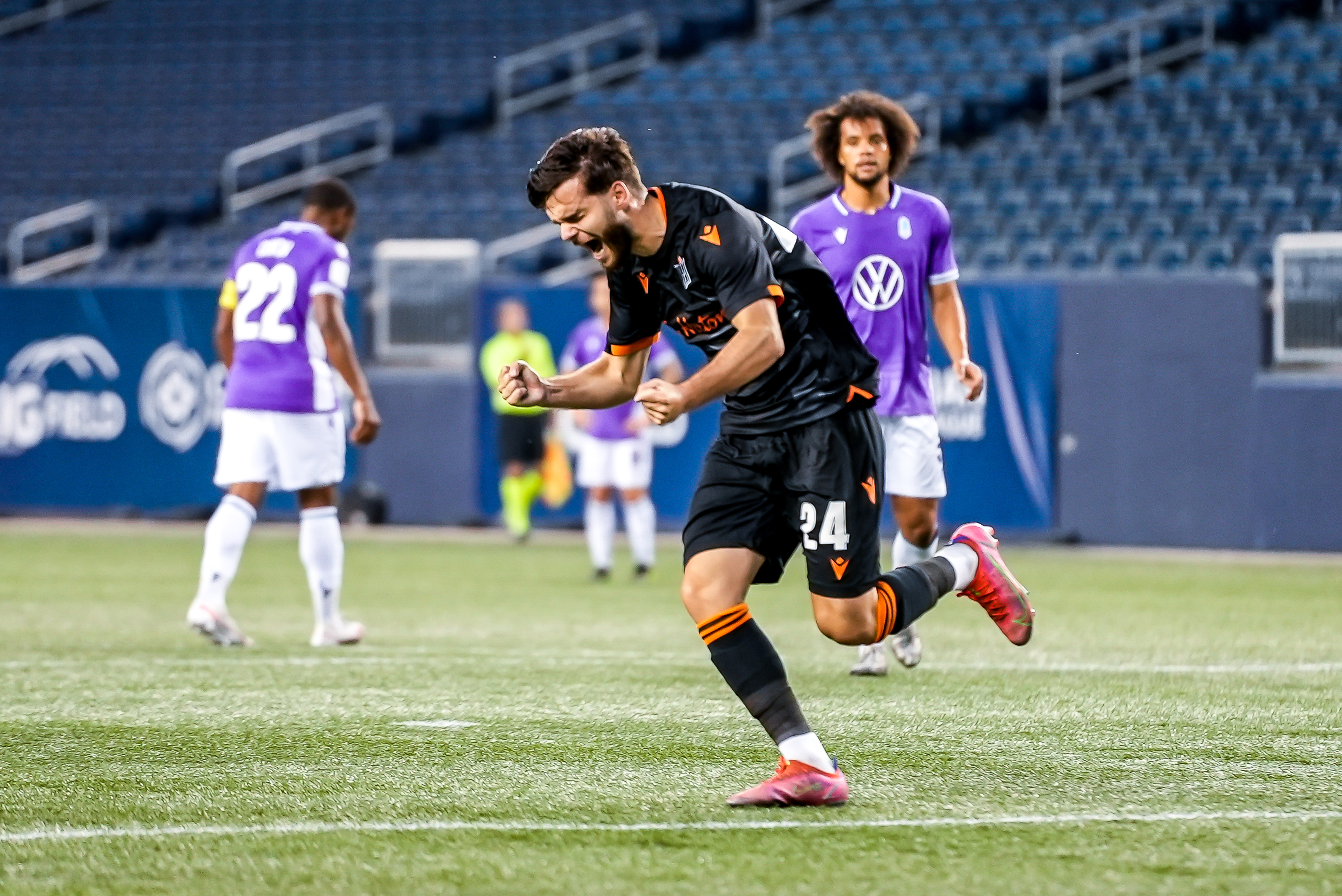 An incredible long-range goal from Forge FC captain Kyle Bekker was the difference for his club in a 2-1 victory over Pacific FC on Saturday night. After Paolo Sabak gave his team the lead 22 minutes in from the penalty spot, Bekker’s strike doubled the lead. It would end up being the winning goal, as Josh Heard’s second-half finish was too little, too late, despite a Pacific push in the final 15 minutes after the goal. It was a feisty affair, with eight yellow cards handed out in total — including one to Pacific FC head coach Pa-Modou Kah, who criticized the officiating after the match — and a red card for Pacific centre-back Abdoulaye Samake that was rescinded moments later and changed to a yellow card.

Coming into the match, it seemed like the match was going to be won in the midfield, and Forge’s midfielders were brilliant again on Saturday night.

Both goals came from midfielders — Paolo Sabak (who was playing as a false-nine at the top of the Forge attack) scored the opening goal from the penalty spot, and Kyle Bekker’s dipping wondergoal from distance ended up being the match-winner.

Bekker was a key player for Forge all night, as he’s been since day one of the inaugural 2019 season for this team. The goal is what people will remember from this match, but he was also working well off the ball, finding space for him to pick up the ball and pass it again, a strong link between the attack and defence.

He touched the ball 43 times, completing 23 of a joint-team-high 33 passes, including 17 completed in the Pacific half of the pitch.

“And if he’s not going to be the best on the ball, he’s going to give us everything else — his movement on the pitch and his leadership — from that aspect he’s been excellent from the first day to today, and we want him to continue that way.”

Smyrniotis also had a lot of praise for Sabak in his post-match press conference.

“Sabak’s a player that we want closer to the goal,” he said. “When he’s closer to the goal, magic happens. Now we’ve done it (moving him a bit higher up the pitch) as a bit of a tactical switch, and it’s worked excellently. He’s been fantastic in the last two games — what he’s done, what he’s created — and if not for a great save by [Pacific goalkeeper Callum] Irving, we may have had one of the most brilliant goals we’ve seen in that first half.”

Elimane Cissé’s performance is also worth noting. Slotting in beside Bekker, Cissé was tied with Bekker with 33 attempted passes, and completed a team-leading 27 of them (81.8%) — with 22 in the opposition half. He also led the team with 51 touches of the ball, four tackles and gained possesion six times. It was an all-around performance for a player that doesn’t always get the credit he deserves as a crucial cog in the Forge machine.

Pacific FC defender Lukas MacNaughton has stepped up this season and been one of the league’s best centre-backs thus far in the 2021 season.

Operating as a ball-playing central defender, he’s been controlling games from the back, often starting rushes up the pitch by passing the ball to one of Kadin Chung or Marco Bustos. MacNaughton led the team in touches (105), as well as both attempted and completed passes, making 89 of 98 attempts on Saturday, good for a 90.8% completion rate, third on the team among starters behind Chung (63/66 — 95.5%) and Matteo Polisi (24/24 — 100%). Coming into the match he led the league in completed passes — with 537, 120 more than Daan Klomp’s 417.

He is absolutely crucial to their distribution, but has also been solid defensively for Pacific. On Saturday he made two interceptions and gained possession six times.

“He’s been superb,” Pacific FC head coach Pa-Modou Kah said after the match. “There’s nothing more I can ask of him, he’s got to keep going because he’s shown another level to his game.”

Usually a midfielder, Forge FC’s Alexander Achinioti Jonsson was asked to play centre-back on Saturday night as Forge FC continue to be left short-handed by several injuries. As a deep-lying midfielder, it’s a role that the Swedish midfielder has often dropped back into at times, and didn’t look out of place at all when asked to play the full 90 minutes there.

Jonsson made a team-high three tackles and five interceptions, slotting into the Forge defence in the middle of a back three.  He also completed 16 of his 26 passes on the night, and proved throughout that he’s comfortable there should Forge want to mix their formation up a bit.

“A lot of times Alex drops into that position, I think the only thing that’s been different here in these last few games is we’ve started with it and we’ve ended with it,” said Forge head coach Bobby Smyrniotis.

That kind of versatility is something that Smyrniotis said is important, and also allows them to play different shapes depending on the opponent or the situation, and change on the fly during matches.

“You want to change things up,” he added. “We’re playing these guys twice, and then we’re going to leave here and play teams 5-6 times on the East side, so I think we need to be versatile in the way that we do things. I’ve been happy to see this, it’s something we wanted to do in preseason — we obviously never had a preseason to be able to see the different formations that we want to use — so now we used it in two matches from start to finish, and it’s something we have in our arsenal to morph into in games, start in, or finish in.”