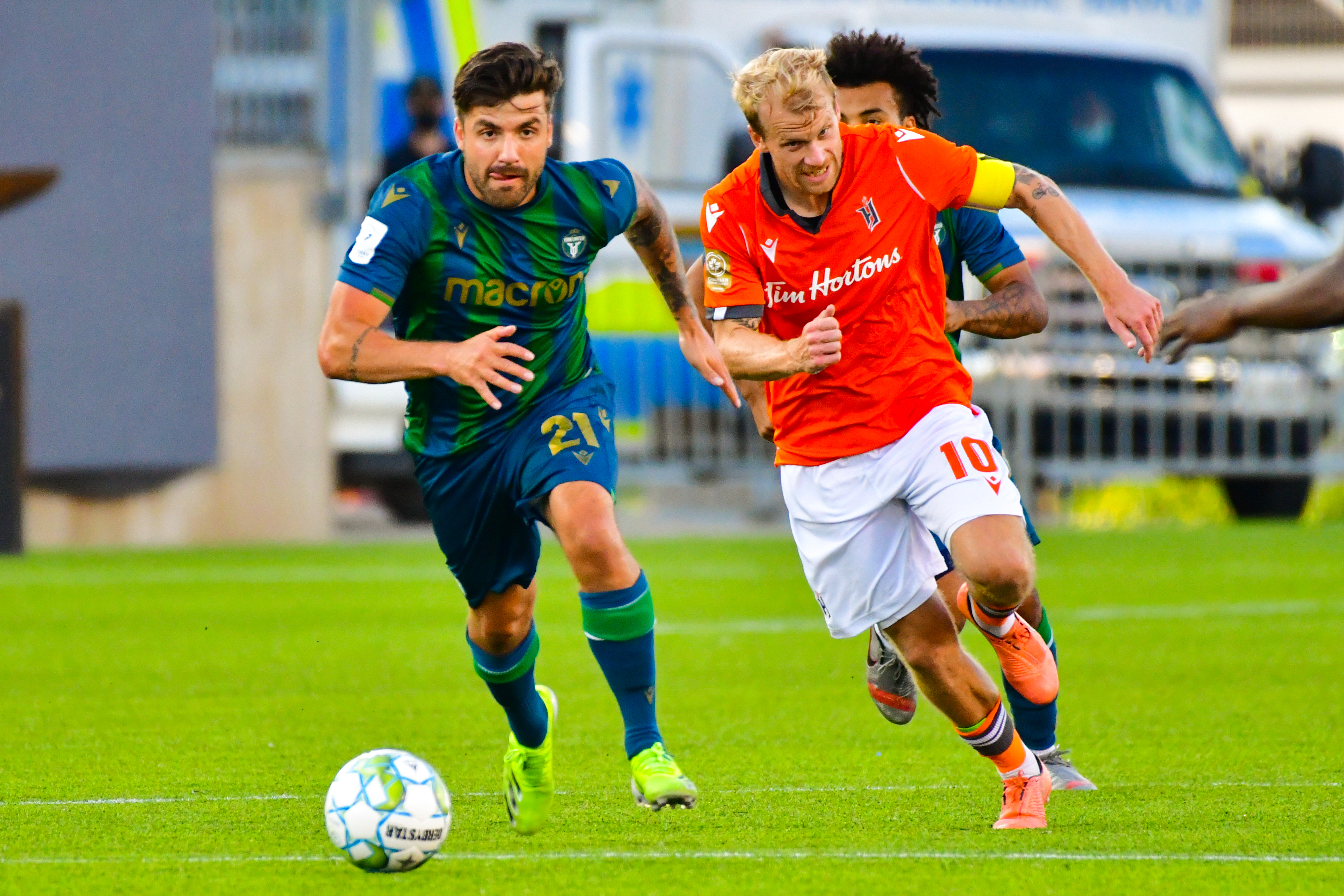 For the third time this year, York United will travel down the highway on Saturday for a 905 Derby clash with Ontario rivals Forge FC, as Tim Hortons Field hosts the ComeOn! Match of the Week. With both sides locked in a scramble for points and playoff positioning, this fourth edition of the fixture in 2021 promises to be an entertaining one.

Forge, returning home after a road trip that saw them lose 2-0 to HFX Wanderers before beating Atlético Ottawa 1-0 on Wednesday, find themselves third in the CPL table with a 9-1-6 record and 28 points, which means they’re six back of the top spot after Pacific FC’s win over Cavalry FC on Thursday night. Although they lost in Halifax, Forge have picked up some big results recently, winning three of their last four contests. They’re 3-1-1 at Tim Hortons Field this year, having won their last two home games by very decisive scorelines.

Still, it’ll be important for Forge to continue picking up points, as they add to their cushion and cement their place in the playoffs. They’re six points clear of Valour FC as it stands, which gives them some breathing room, but they’ll be keen on widening the gap and breaking into the top two.

The visiting York United, meanwhile, are on the outside looking in when it comes to the playoff picture. With a 4-7-5 record and 19 points, they’re fifth in the table — just three points shy of fourth-place Valour. A road win in Hamilton would bring York level on points, although they’d still remain behind Valour on goal differential.

The Nine Stripes would also desperately like to return to the win column, with four draws and one loss in their last five games. They recently picked up a point in both Ottawa and Halifax, with the latter fixture being a stunning 3-3 draw at Wanderers Grounds on Labour Day that saw York cough up a two goal lead, then pull ahead again just before fulltime, only for HFX to score right at the death to steal a point.

They’ll be buoyed a little by the return of club captain Roger Thompson, who should be back in the lineup on Saturday according to coach Jimmy Brennan. That should allow Brennan to deploy Jordan Wilson in his natural midfield position, after filling in at centre-back for several weeks.

After three meetings between these teams so far, Forge have a slight edge, winning two of them. The Hammers took the most recent contest, winning 3-1 back on August 28 thanks to goals from Tristan Borges, Woobens Pacius, and David Choinière. Before then, they played back-to-back at York Lions Stadium and Tim Hortons Field within a week, and both teams won the road fixture by a 1-0 score.

With so many meetings between these teams, Forge coach Bobby Smyrniotis explained that these games will increasingly become tactical chess matches, as he and his opposite number look to catch the other by surprise or find a new way to break down a familiar opponent.

“We’ve played them with different formations, with having a lot more of the ball, giving up the ball, we’ve done things differently and I think that’s important,” Smyrniotis said on Friday. “I think you need to be flexible in these matches; we’ve seen enough of each other that we kind of know the ins and outs of where we need to be and it’s something that, to be honest, I’ve enjoyed because it’s started to become a little more tactical.”

This clash between local foes is sure to be a fascinating one as these teams try to Plenty is at stake on Saturday afternoon as we enter the homestretch of the 2021 season.

“You see so much of (Forge) you end up knowing what they’re having for breakfast. It becomes a bit more tactical trying to find certain weaknesses they have, but the players know exactly who they’re playing against.” — York United coach Jimmy Brennan

“I have trust in the players to go out and have the solutions. We talked about different aspects of the game and what solutions will be needed, and I think they’re doing a good job of that.” — Forge FC coach Bobby Smyrniotis