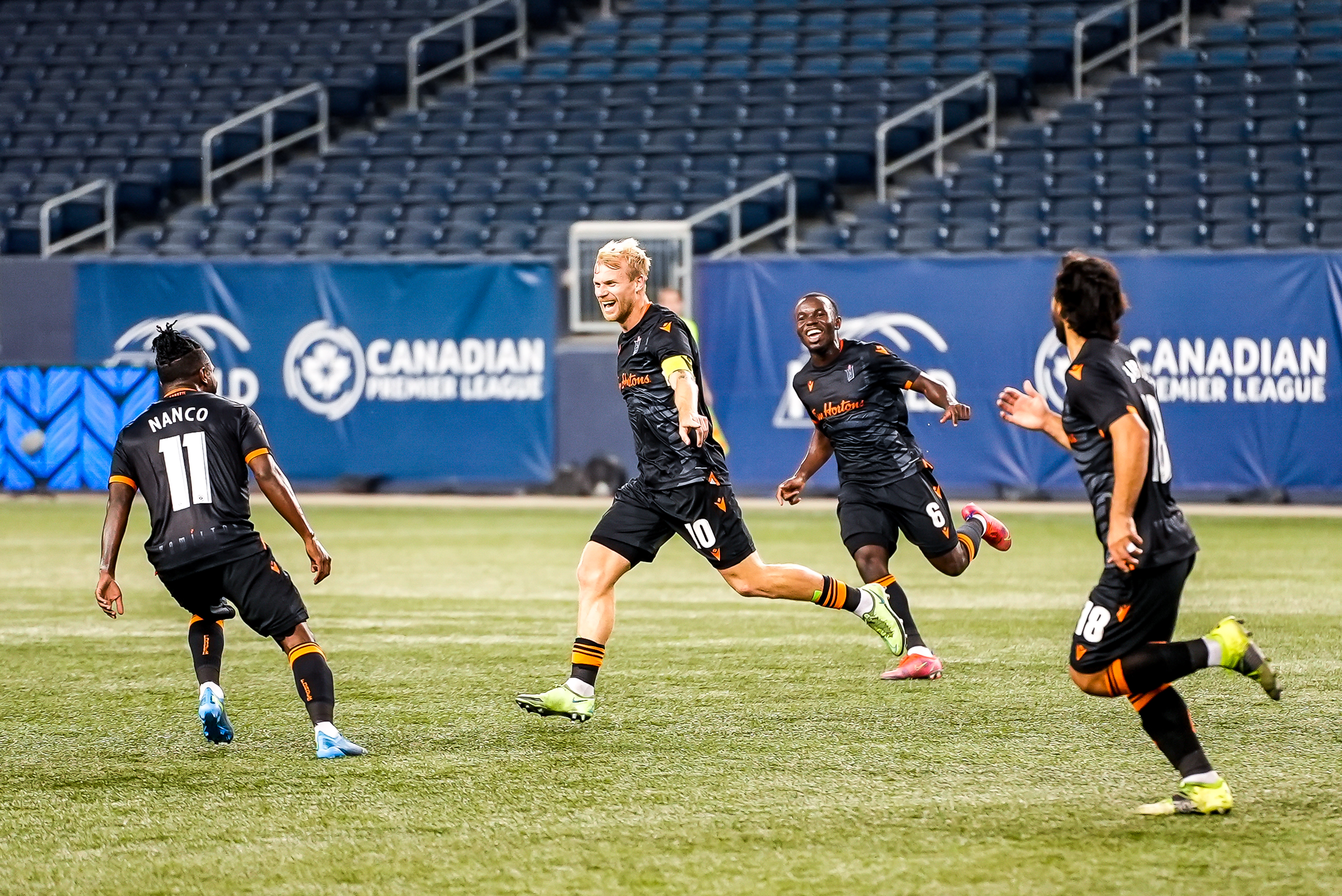 Forge FC jumped into second place in the Canadian Premier League standings on Saturday night, beating Pacific FC 2-1 thanks to first half goals from Paolo Sabak and Kyle Bekker.

Forge started the game with a short bench — only able to name six of the permitted seven players — as they continue to deal with a number of injuries, while Pacific FC are back to full strength and welcomed Matthew Baldisimo back to the matchday squad.

Ollie Bassett, onw of Pacific FC’s standout players seven matches into the season, came close to giving his team the lead about four minutes in the match. After Dominic Samuel was called for a foul on the edge of the box, Bassett fired the ensuing free kick, and missed the top right corner by a narrow margin.

Forge FC won a penalty in the 21st minute after the ball struck the arm of Jordan Haynes, giving Paolo Sabak the opportunity to step up and take a shot from 12 yards. He placed the ball into the bottom left corner, giving Forge FC the 1-0 lead 22 minutes in.

Sabak nearly doubled the lead for Forge a few minutes later, turning and chipping a shot toward the Pacific goal, but a diving Callum Irving was able to push it wide of the post with a fantastic save.

Kyle Bekker would make it 2-0 at the half-hour mark, firing a rocket past Irving from long-range. He took a touch, turned, and sent a dipping shot across goal and into the top right corner. It was a third goal of the season for the reigning Player of the Year, with all three being impressive strikes by the Forge captain.

Immediately after the goal was the first half water break, which allowed Pacific to reset and take a breather, and they came out of looking more impressive than they had done in the 10-15 minutes prior. Marco Bustos made a couple of driving runs, and linked up with his usual partners in crime Ollie Bassett and Kadin Chung.

They pushed but couldn’t find a goal in the next 15 minutes or so, and the first half ended 2-0 to Forge FC.

Pacific’s first chances of the second half came from corners, as Lukas MacNaughton and Alejandro Díaz both missed the goal with headers around the 60-minute mark. Triston Henry came out to punch the ball on the second one, but missed, allowing Diaz a free header, but the Mexican forward couldn’t keep his header down, and it went over the bar.

Josh Heard pulled one back for Pacific in the 77th minute, receiving a long ball down the pitch from Alessandro Hojabrpour before sliding it under Henry to make it 2-1. It was the third goal of the year for Heard, tying him atop the table with Bekker, teammate Marco Bustos and Moses Dyer from Valour FC.

Pacific FC kept pushing for an equalizer, with Chung among several players firing crosses into the box, but none led to the goal that Pacific craved.

There were some fireworks at the end of the match after Abdoulaye Samake pushed Dominic Samuel to the ground while jostling for position in the box on a set piece, and a scrum formed around the two. Samake appeared to be sent off, but the referee changed his mind and ended up downgrading it to a yellow.

It wouldn’t have any effect on this match in the end, as it was one of the last moments of the match, with the referee blowing the whistle for full time a few moments later — ending a 2-1 victory for Forge FC.