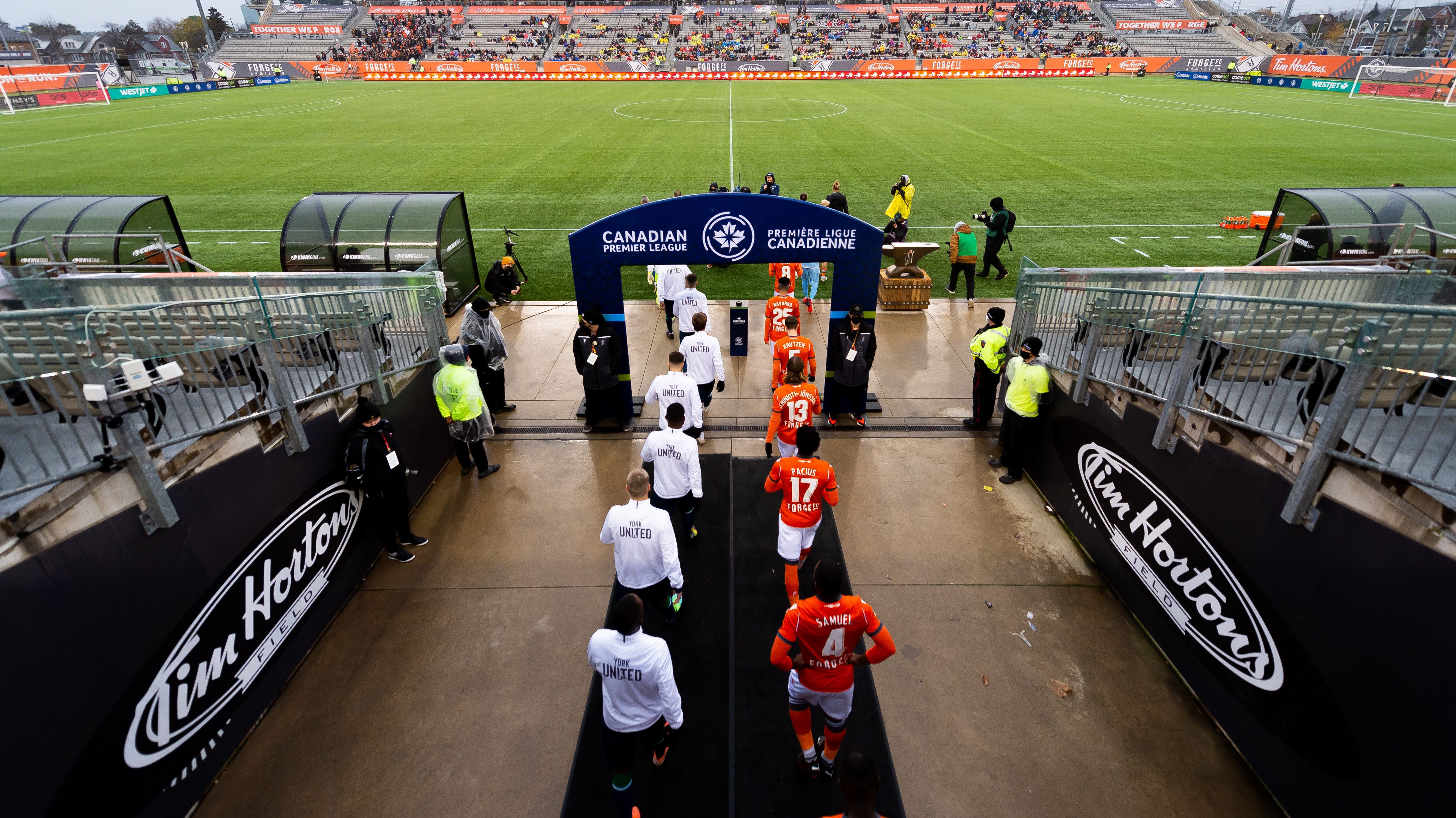 Another year, another final for Forge FC.

The result means Forge will host Pacific FC in the 2021 CPL Final on Sunday, December 5.

Woobens Pacius’ opener in the opening 10 minutes put Forge on their way, though York United’s Michael Petrasso equalized before halftime with a brilliant outside-the-box free-kick that looped into the goal.

A wet and intense second frame followed, punctuated by a well-worked goal from Josh Navarro, who sliced home the match winner in front of a raucous crowd. Navarro created another goal soon after when he nodded a near-post header into the mixer, eventually seeing his deflected shot find the net.

Here are your sights and sounds for Sunday’s semi-final.

The defending champs take the lead early on as @WoobensP finds the back of the net for @ForgeFCHamilton ⚒️#CanPL l 📺: @onesoccer
pic.twitter.com/TatxZZ3O2C

It's MICHAEL PETRASSO with the 1-1 equalizer for @YorkUtdFC vs. @ForgeFCHamilton with a well-placed chip

Giving the away fans something to cheer about 📢#CanPL l @yorkutdfc pic.twitter.com/HzGTCOL1ZQ

JOSHUA NAVARRO restores the advantage for @ForgeFCHamilton vs. @yorkutdfc, as Hamilton looks to book a spot in the 2021 #CanPL FINAL 🏆

It’s Joshua Navarro again as he gets his head on the cross #CanPL l 📺: @onesoccer
pic.twitter.com/k2fU2sKgBM

Incredible! The Hammers are up 3-1 with 10 minutes left, courtesy of Josh Navarro!

GOING FOR THE HAT TRICK! 🔥

POST-GAME 🎙@KristianJack touches base with @YorkUtdFC head coach Jim Brennan following his team's #CanPL PLAYOFFS bow – and a 2021 season with plenty to be proud of 👏 pic.twitter.com/oj6ZN7oXP6

🗣️🎙️ @yorkutdfc's @zator94 on being "immensely proud" of York's 2021 season after it ended vs. Forge in the #CanPL semi-final. pic.twitter.com/9SLHE80YWA

Chatting with @yorkutdfc boss Jim Brennan post game after @ForgeFCHamilton win 3-1 and go on to the final pic.twitter.com/AZACIWKyAK

🗣 "But the sure thing we have is in two weeks we're going to bring another trophy into this locker room,"#CanPL l @ForgeFCHamilton pic.twitter.com/8dRhApghbZ