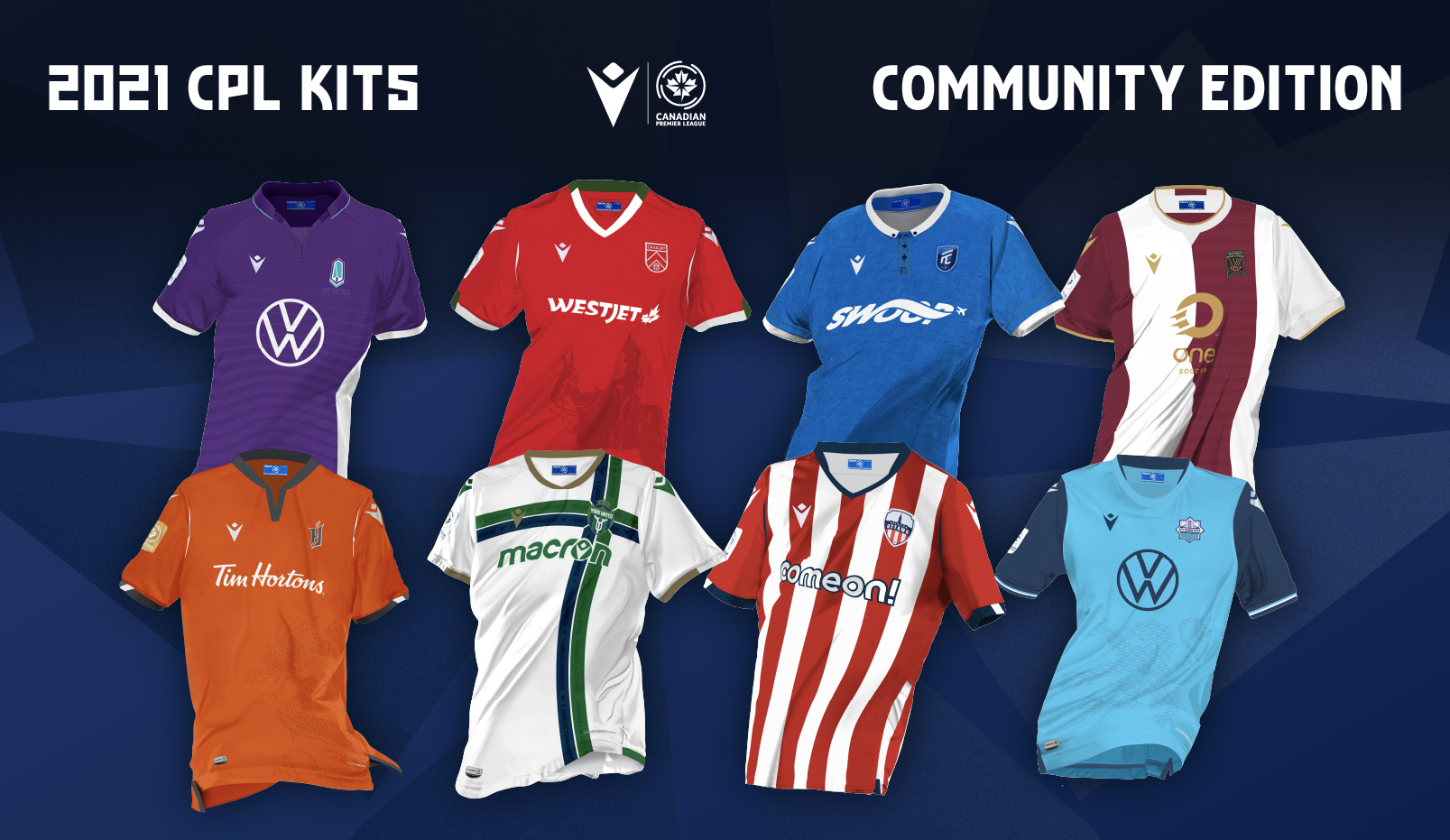 The Macron 2021 new kits will make their debut on June 26 when The Kickoff Presented by Volkswagen will commence with the League’s 2021 regular season’s first two matches. This year the
kits provide a nod of acknowledgement and gratitude to the community where each club plays. Each jersey features a unique graphic, symbol, image, or icon that represents their home.

While the look of each jersey is unique in design, developing high quality custom kits with unique looks to provide the needed professional technical features while enhancing them with exciting graphic designs is the key to the Canadian Premier League / Macron partnership.

Each team-authentic jersey will be available online for purchase at: HFX Wanderers FC, Atlético Ottawa, York United FC, Forge FC, Valour FC, FC Edmonton, Cavalry FC and Pacific FC for $119.99 CAD (Men’s), $119.99 (Women’s) CAD and Youth $79.99 CAD. Fans will be able to customize each jersey with either their favourite CPL player or own names and number for an additional $34.99 CAD.

Read more about all the CPL Macron Kits here.

About Canadian Premier League
Canadian Premier League (CPL) is Canada’s Tier 1 professional men’s soccer league that debuted on April 27, 2019. Playing in world-class and unique venues, and partnering with strong community-led ownership groups, the CPL is a league for Canadians by Canadians that brings professional soccer to communities coast-to-coast. For updates and more information, please go to  CanPL.ca.

Macron (www.macron.com) is a leading European company in the production and sale of active sportswear, operating in four main business areas: Teamwear, sportswear and accessories for team sports (football, rugby, basketball, volleyball, baseball, handball, futsal, running); Merchandising, official kits, free time products and accessories for the supporters of the club sponsored by Macron; Run; Train, technical apparel for individual runners and for fitness; Athleisure, sports inspired apparel for leisure time, for those who wish to wear Macron outside pure sporting activities. Macron owes it success to the capacity of interpreting the needs and demands of those who do sport, developing high quality and technicality products.

We Are Many, We Are One! Divided on the field, but united in our hearts, we celebrate our shared passion for soccer with this mantra on the back collar of all our kits. Every jersey features the league’s mission “For Canadians, By Canadians” on the inside neck – an everyday reminder of why this league exists and to inspire our mission to grow the beautiful game of soccer in Canada.

The icon of the Italian brand, the Macron Hero characterizes and identifies the technical garments. The logo features the human body and takes inspiration from the tip of the spear, by definition a representation of dynamos and speed. The Macron Hero symbolizes even more effectively the joy at the end of the challenge, the achievement of a target, fatigue, passion and determination and epitomizes the Macron philosophy: “Work hard. Play harder”.

The Swell jersey is symbolic of the energy and passion of the community on Vancouver Island. Maintaining Pacific FC’s primary colour – Starfish Purple. The jersey is inspired by a series of ocean- surface gravity waves created by distant storms out at sea that are featured prominently throughout the jersey.

The Macron 2021 predominantly red jersey incorporates pops of White and Regimental Green in the collar and sleeves. Inspired by Fort Calgary, the jersey features a sublimated print of Colonel James McLeod on the front, and the Fort Calgary wall on the back. Today, Fort Calgary is a symbol of shared histories, coming together, culture, trade, and inclusivity.

The FC Edmonton 2021 football shirt maintains the recognizable classic Royal Blue, with a twist. Inspired by Blue Denim the jersey includes subtle pops of the classic White and Dark Blue and a stylish add-on to the collar with navy buttons. No jersey is complete without a nod to the Eddies symbol of good luck, Rally Rabbit, who is featured prominently on the back of the collar.

The predominantly White Valour FC jersey design features a sublimated print inspired by the greatwheat fields of Manitoba that is subtly incorporated into the Valour Maroon colour blocks. The  back is solid White with Harvest Gold accents such as trim at the crew-neck collar and sleeve cuffs.

Staying true to Forge FC’s Spark orange and grey colour scheme that fans have grown to love. Like the sparks from the hammer, a dragon’s fire represents the energy that sparks Hamilton’s creative force, ambition, and hard work to push the community forward is the inspiration for Forge’s jersey inspiration.

A fiery dragon is uniquely embossed on the front and back of the jersey with a callout to Forge FC heat printed below the player number. The Canadian Premier League 2021 Champions will again be sporting the Gold Champion Patch this season.

York United’s 2021 football shirt features the club’s all-new colors and logo and will highlight their new primary colours York Green, Lake Ontario Blue and Victory Gold. Inspired by: A United Community, the motto of the old City of York: E SINGULIS COMMUNITAS: FROM ONE, A COMMUNITY is sublimated through the Blue and Green jersey stripes on the primarily White top.

While maintaining the primary look of their parent company, Atlético Madrid in a nod to their history. Atlético Ottawa’s 2021 look is a nod to their city. Ottawa who is uniquely acknowledged through a subtle sublimated “O” chain design in the Federal Red jersey’s stripes is designed to represent a symbol of togetherness, teamwork, and passion of the Ottawa-Gatineau region. The back of the jersey features a large red Maple Leaf, which will be visible under the player numbers, a nod to the club’s Canadian identity.

Inspired by the Flag of Nova Scotia, that features a Lion Rampant crest in the centre. HFX’s 2021 Macron jersey features a sublimated Lion Rampant on the front that symbolizes strength, courage, and leadership – like the unique individuals who call Nova Scotia home. The predominantly Aqua Ocean Blue top features the classic Harbour Sky and White colours throughout. The club’s slogan, “Together X From Aways” is boldly centred on the jersey’s back.