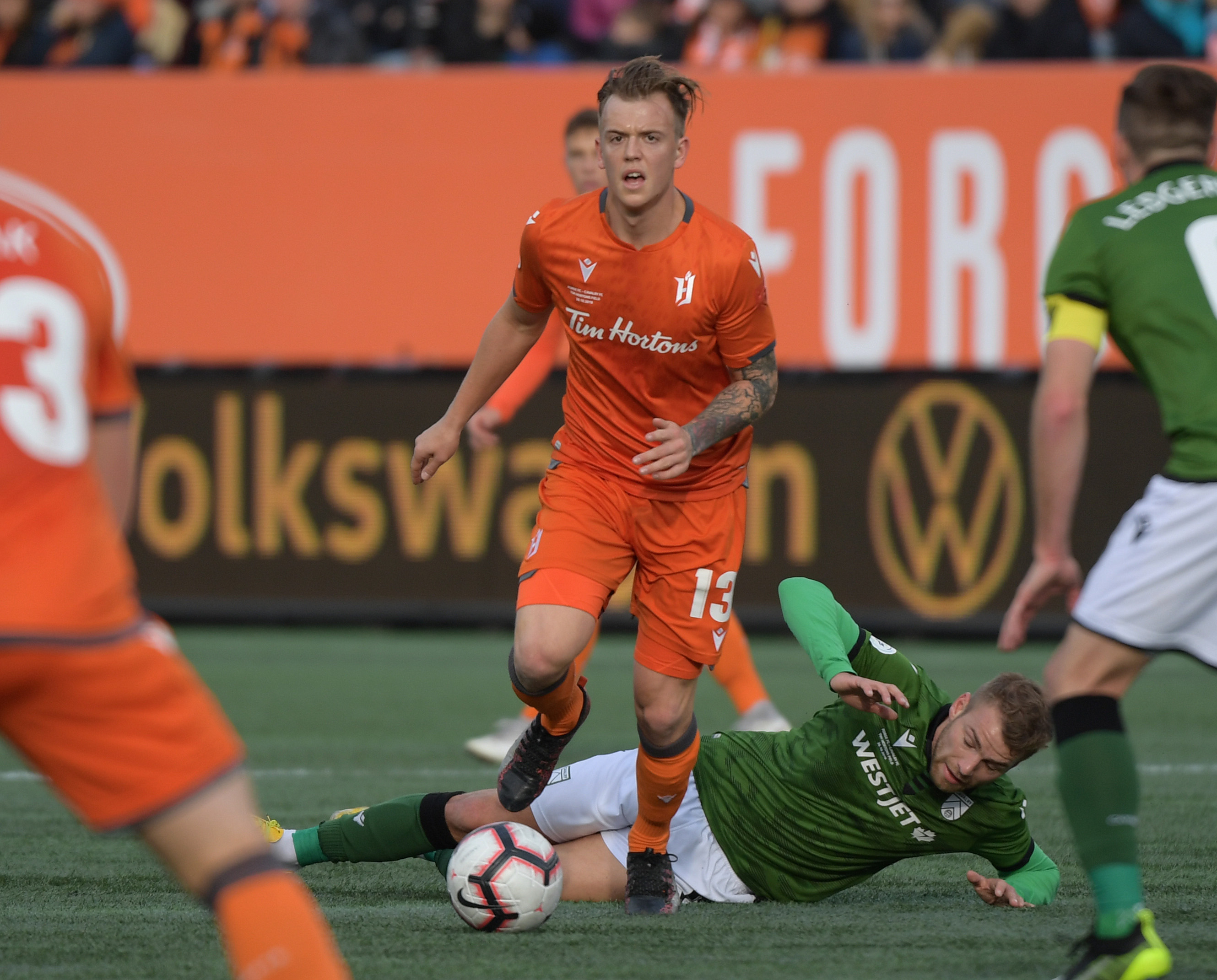 Last week, Kadell Thomas reminded CanPL.ca readers that Forge FC should, for very good reason, be considered among the elite of the Canadian Premier League.

“A lot of us have been playing with each other for six, seven, eight years now,” Thomas said. “Some of these (other) teams are rehashing everything they have, starting from scratch. The chemistry won’t be there.”

Indeed, about 10 of Forge’s players have known each other since their days together at Sigma FC. But what about those who were new to the team last year?

Swedish midfielder Alexander Achinioti-Jönsson was one of the international players that Forge coach Bobby Smyrniotis introduced to the group in 2019, to great effect. Somehow, the soon-to-be CPL champions managed to seamlessly combine a group of familiar teammates with key newcomers to become a league powerhouse, something that left a lasting impression on Achinioti-Jönsson.

“They’ve played together for a long time and they knew each other better,” Achinioti-Jönsson told CanPL.ca. “But I never had any issues getting into the group. They got me into the team and integrated me into the society a bit in Canada.”

It was certainly a bit of a culture shock for the 24-year-old, who had until then never played outside his native Sweden. He admitted that he found training sessions to be much different on this side of the Atlantic.

“What struck me first, soccer-wise, was we did passing drills and technical drills in the beginning of last pre-season, and I was just very impressed by how technical everyone was,” he said. “But then, maybe not in the points where I’d been drilled a lot when I was a youth player and what I grew up on, like the tactical stuff wasn’t really there.

“We had a bunch of trial players as well, (so) it was more a mentality of just thinking of yourself in a different way; you had really good technique and passes. But on the big field it was decision-making and stuff that wasn’t always right.”

Forge’s focus on fundamentals and technical skill impressed Achinioti-Jönsson, who added that the tactics certainly did fall into place as the process continued.

“Seeing how our team did last year I think we were great, that all came together,” he said. “But that’s what struck me in the beginning, it was a bit different from Sweden, the tactical stuff.”

Which style suited the midfielder better, though? Achinioti-Jönsson was one of the best defensive midfielders in the CPL in 2019, rating near the top of his position in interceptions and passing. His confidence on the ball and technical ability served him well, but he also suggested that his background in the Swedish system helped him adapt to the CPL.

“I can also contribute with what I know from learning the defensive principles I got from Sweden,” he said. “I like moving around on the field and everything, and helping apply it. Obviously in a central role on the field you try to keep everything together and make sure you’re moving as a unit and all that.”

Now, with a full year of becoming acquainted with the Forge system under his belt, Achinioti-Jönsson agrees with Thomas that they should again be a top team in the league in 2020.

“If you can keep the same squad basically there’s nothing saying we can’t do as well as we did last year,” he said. “Or even better, because last year was a lot of players’ first year and we’re ready and more prepared for what’s to come than we were last year.”

Learning how to adapt to soccer in Canada was something Achinioti-Jönsson embraced; he’s certainly not shy about taking on new challenges and learning. Thrown off the deep end into one of the strongest midfields in the CPL, he thrived.

Observers of Forge FC’s social media channels will have seen that desire for new challenges in action during the recent quarantine period, too.

Achinioti-Jönsson, who has experience playing the bass and piano, picked up his brother’s guitar while bored at home in Sweden over the winter.

This writer did advise the midfielder, though, that he could definitely use a capo.

“It’s something I’ll invest in, definitely,” he laughed.

However, he won’t have as much time to practice for a while, with training once again picking up speed.