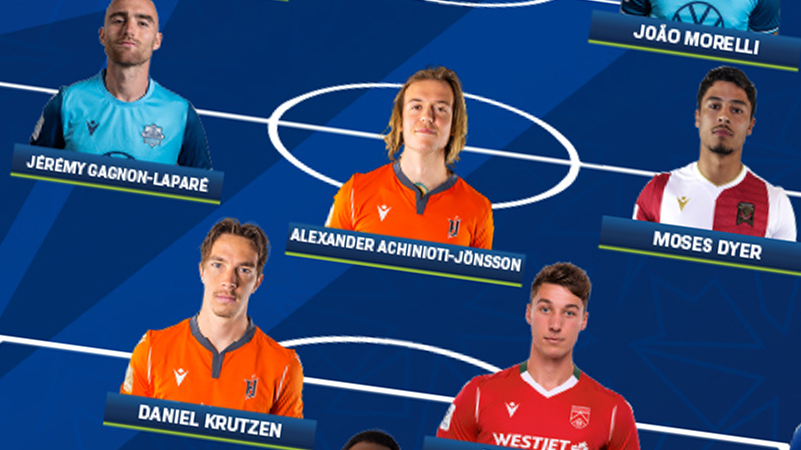 The Gatorade Team of the Week for the 15th week of the Canadian Premier League action in 2021, brought to you by Kristian Jack and OneSoccer’s Oliver Platt. 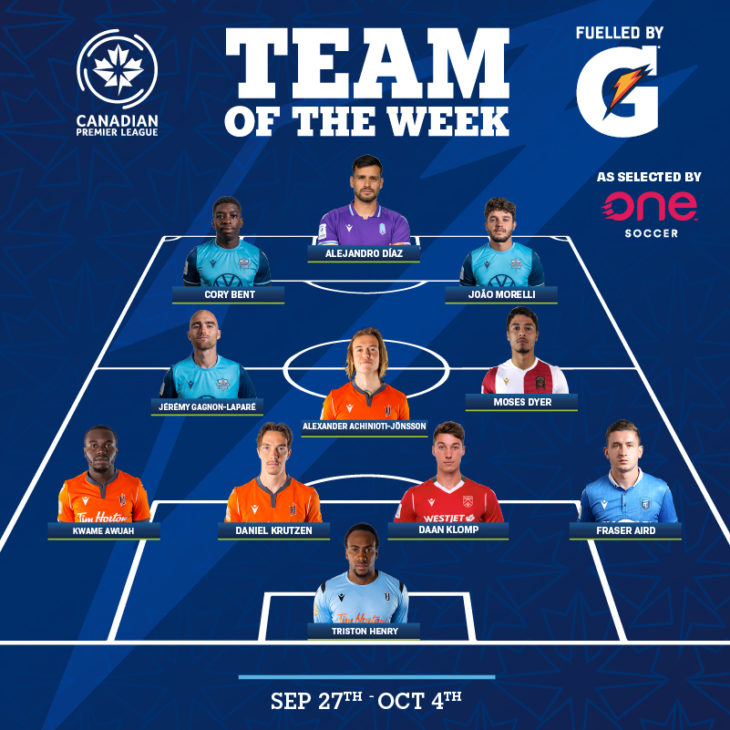 Another brilliant week for Forge and their standout goalkeeper, who backed up his showing in Panama with another clean sheet in the nation’s capital against Atlético Ottawa. The 2020 Goalkeeper of the Year winner is showing why he will be considered for that award again in 2021 with consistent performances and made a tremendous two-handed save on Ryan Telfer to preserve another clean sheet on Sunday.

Another good week for one of FC Edmonton’s best players in 2021 and one of the league’s best at deliveries from wide areas. Aird had a fantastic performance midweek against Cavalry FC, sending two pinpoint corners for his team to get two goals in an action-packed second half and was just as impressive without the ball, leading his team in tackles and possession gained. Rested in the opening half on Saturday against Valour FC he entered in the second half and made an immediate difference. FC Edmonton’s team thrives off deliveries into the penalty box and Aird led all players with 10 crosses despite playing just 45 minutes. A key piece to build around for a team looking for answers in 2022 and beyond.

The Dutchman makes a deserved return to the Gatorade Team of the Week after a commanding display in Edmonton where he led his team in tackles and interceptions. Once again, Klomp showed his ability in the opposition’s penalty box by scoring the winner ten minutes from time. The 23-year-old has been used as a right back in a back four lately and gives Tommy Wheeldon Jr the tactical versatility his squad craves.

The Belgian admitted this week that a busy schedule has allowed him to find his peak physically after he missed eight games over a month earlier this season. As noted last week in the selection’s for the Gatorade Team of the Week, Krutzen is now at his peak and taking Forge to another gear in 2021. The 25-year-old led his team in clearances in Ottawa but it was his work with the ball that was just as impressive and his combination with Kwame Awuah on that left side as evident by the average position of each below – Krutzen (5) and Awuah (6).

In a league where many full backs are having fantastic 2021 seasons what allows Awuah to standout above the rest is his reading of the game and his tactical versatility. Multiple times this season the left-back has been asked to cover inside in midfield when in possession and this allowed Tristan Borges and Paolo Sabak to play higher against Atlético Ottawa and cause the home team a lot of problems. Awuah’s understanding on when to do so and when to stay wide speaks to his overall football intelligence and he offered a masterclass in modern full back/midfield play on Sunday as shown by his touch map.

Back-to-back showings in this team for the Swedish midfielder who ran the show for Forge on Sunday, completing 45 of 48 passes and leading the team in interceptions. All this came five days after dropping deeper inside a back three in Panama and bringing a real calmness to a squad that played the second half with a man down after the controversial red card given to Mo Babouli. As we head towards the climax of the season he is one of a handful of Forge players who could be discussed as a potential league MVP candidate.

Positive results haven’t come as quickly as new boss Phillip Dos Santos perhaps would have liked in the short-term since he was appointed boss but he is finding key pieces he can build around and that list is probably led by the New Zealander. Dyer scored in back-to-back games this week for Valour playing in an advanced false nine role where his energy and pressing can cause opponents problems.

In a match on Sunday at York Lions Stadium where both left backs led their teams in touches, Gagnon-Laparé gets the nod over Diyaeddine Abzi after two excellent showings this week. Good against Ottawa, he was even better at York, driving forward and into space in the buildup to the opening goal and making a key cross for his team to take a 2-1 lead through Mamadi Camara. The 26-year-old has now adapted to a left back role inside a back four just as well as he did from a midfielder to a left wingback earlier this season. In a team now unbeaten in 10 it has been the consistency of players like this that has pushed Stephen Hart’s team to the edge of a playoff spot.

The Brazilian is welcomed back to the team of the week after another brace midweek where he took over a match and delivered the kind of performance that people will talk about when building his MVP case. His second goal was one of his best this season and shows just how comfortable he is in space outside the penalty box with his head up.

It's Joao Morelli's league – we're just living in it 🌊

Yesterday, the @HFXWanderersFC star added goals 13 & 14 to his 2021 #CanPL season haul, once again punishing @AtletiOttawa for all three points

Arguably the best number nine in the league in 2021, Diaz had another fantastic week with a brace in Winnipeg. After draws against FC Edmonton, Atlético Ottawa and a loss to Forge, Pacific needed to find the best version of themselves again at IG Field and were boosted by a brace from the Mexican who netted an early penalty and found the back of the net in the second half to ensure the scoreline of 3-1 was matched by the performance.

The Englishman started the week with a great showing against Ottawa at home when his directness and pace on the right side helped win the penalty that was converted by Joao Morelli. He continued his excellent run of form into York Lions Stadium on Sunday, delivering a pinpoint cross for Akeem Garcia to score a crucial equalizer in the first half. Bent would leave the game through injury later and was badly missed as York regained momentum in the match.

Akeem Garcia, welcome back to the highlight reels! 🎞

The @HFXWanderersFC star returns to scoring form for the first time in 2021 to equalize vs. @YorkUtdFC off a Cory Bent cross#CanPL 🇨🇦 | 📺 TELUS ch. 980 | 🔴 https://t.co/hishXepRT3 pic.twitter.com/WZJGCWrNcC