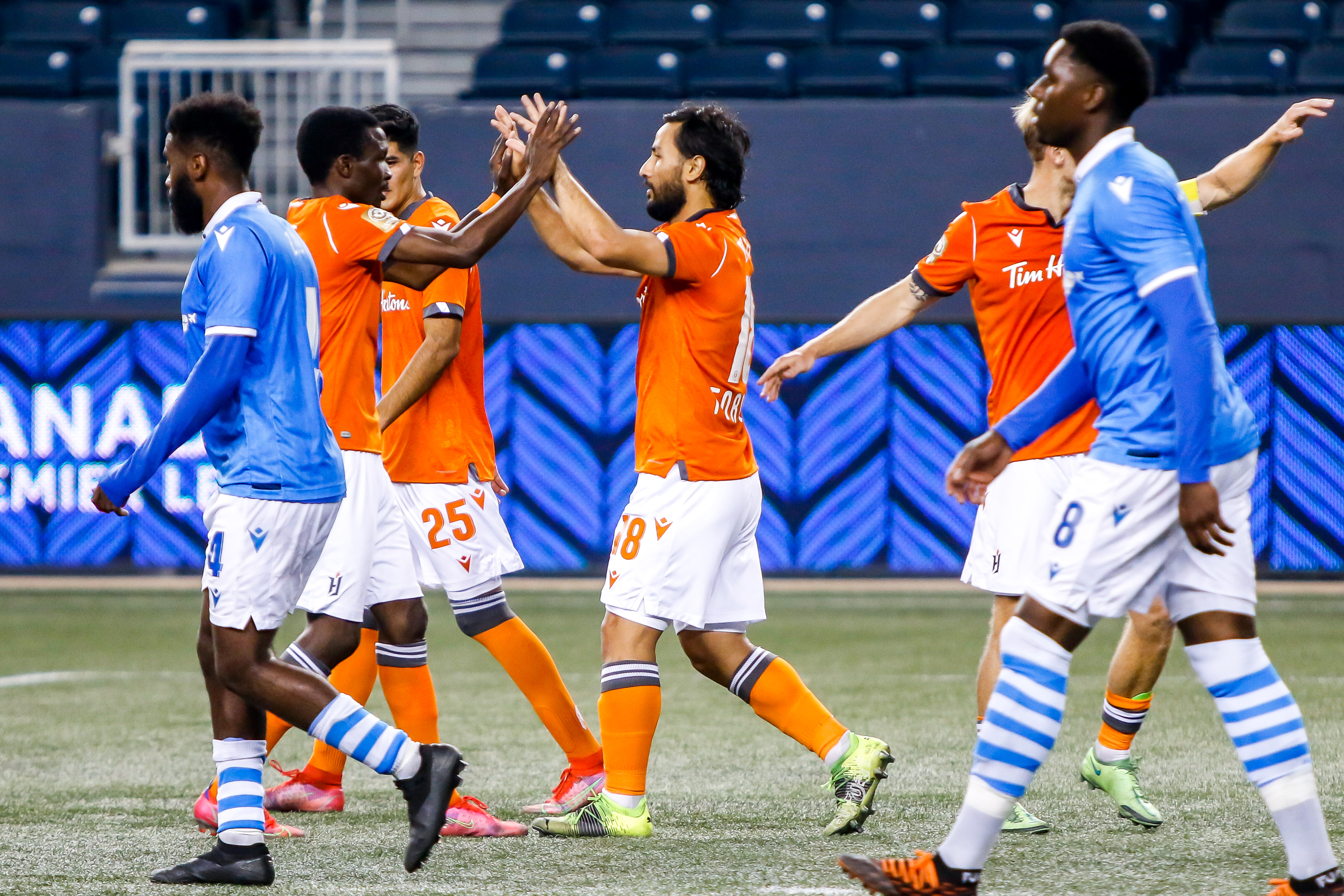 Mo Babouli’s penalty kick in the 38th minute proved to be the decisive goal on a night when the reigning champions, missing key players, flexed their muscles and executed a tactically intelligent gameplan to win a match that could have been more comfortable than the 1-0 scoreline. Having lost three of their first five games, one already to their opponents FC Edmonton, without two of the starting centre-backs, key players from the start like Tristan Borges, Forge needed to find a way to win a game and did so in impressive fashion through a real collective effort and understanding of their roles.

Bobby Smyrniotis didn’t have many healthy bodies available to him heading into this game. Jonathan Grant, Daniel Krutzen, Dejan Jakovic, Maxim Tissot and Borges were amongst the names unavailable to start the game but the man who has guided the Hamilton-based side to back-to-back championships still found a system for the 11 players he had available and it helped win them the match on this night. “It was a good performance start to finish,” the head coach admitted postmatch. Chris Nanco occupied a wide right position in a 3-4-3 and had a lot of joy early in the game by staying wide and creating space inside for others to exploit. Paolo Sabak had his best game of the season, playing a false nine where his intelligent and movement shone in possession and his workrate was clear to see out of possession, regularly stopping balls played into Edmonton’s central midfield. Smyrniotis: “We worked on the system the past couple of days and with Paolo it was about getting him into spaces on the field he could succeed, into a midfield box and allow Babouli and Navarro into the half-spaces.”

Mo Babouli, on the left, and Josh Navarro, on the right, pressed intelligently, targeting the centre-backs out of possession, and the space between full backs and centre-backs when in attack. It took a real collective effort for all eleven players to do their jobs, Kyle Bekker and Elimane Oumar Cissé covered a lot of ground as a double pivot for example, while the stylish Swede Alexander Achinioti-Jonsson moved out of his preferred defensive midfield role to a position in between the back three where he read the game brilliantly and was able to showcase his excellent all-around passing abilities. A different kind of test came his way in the second half, with FC Edmonton playing forwards Easton Ongaro and Tobias Warschewski together for the first time and going more direct, but like everything that was thrown at Forge on this night, they won the physical battle, the key second balls and kept the game at their tempo for the majority of the match. “The system wasn’t too different to ways we often play in matches, we naturally do this sometimes in our (usual 433) shape, it was about getting players into the right zones and spaces to dominate the game. Alex (Achinioti-Jonsson) is such a cerebral player who reads the game so well and reacted well to different challenges tonight,” Smyrniotis reflected accurately afterwards. Quietly, his value and importance to this team is up there with any other player.

Alan Koch made six changes from his starting XI that lost to HFX Wanderers, despite that being their only other game in the last 10 days, but other than a chance early from Ongaro the Eddies struggled to get any momentum in the game through the first 45 minutes. Koch became the first manager in the CPL this season to make three substitutions at half-time with the more technical, forward-thinking Thomas Gardner in at central midfield for Allan Zebie, Jeannot Esua in for Roberto Avila, pushing Fraser Aird further forward to try and keep Kwame Awuah deeper, and striker Tobias Warschewski, for Kyle Porter, finally joining Ongaro in a front two for the first time this season. “We haven’t worked on that much at all in training,” Koch admitted afterwards about the forward tandem but admitted he saw a lot of positives and wasn’t too disappointed despite the defeat. “I know I sound like a broken record but we are building. We are trying to figure a lot of things out, what works, what doesn’t. We are the only coaching staff and group of players that didn’t have a true preseason (new in 2021) and this is still like our pre-season,” admitted Koch. His defender, Paris Gee, was encouraged by the performance, saying: “We have to keep all our minds positive. Alan puts a lot of confidence in us and we are working really hard for each other.” He is right. It is clear FC Edmonton are not an easy team to break down, having conceded just four goals from five games. The next test for them will be to build on impressive attackers like Warschewski and improve their threat in the final third, having scored just four goals (including three outside the box) through five games.

Forge getting healthier at the right time

Maxim Tissot saw his first action of the season, coming on for 15+ minutes late in the game and having an excellent free kick narrowly blocked, and Tristan Borges, whose quick feet and skill won the free kick, was also given a similar amount of time, coming back on to the pitch in Winnipeg for the first time in ten days after he suffered a knee injury on July 4th against Pacific FC. “I was surprised to see them come on a bit earlier than I expected but I was glad they were able to get through the game and contribute,” said Babouli post-match. They might not be anywhere near where they want to be fitness wise but when a shorthanded Forge can play as well as this, with Borges still to come at his peak, it is not hard to see why they remain the favourites to win it all again in 2021.

There were many candidates for player of the match from the team in orange on this night. Any of the players mentioned in this analysis had a right to claim the honour but goalscorer Babouli set the tone with tremendous work ethic and energy up front that set became contagious through the entire team.