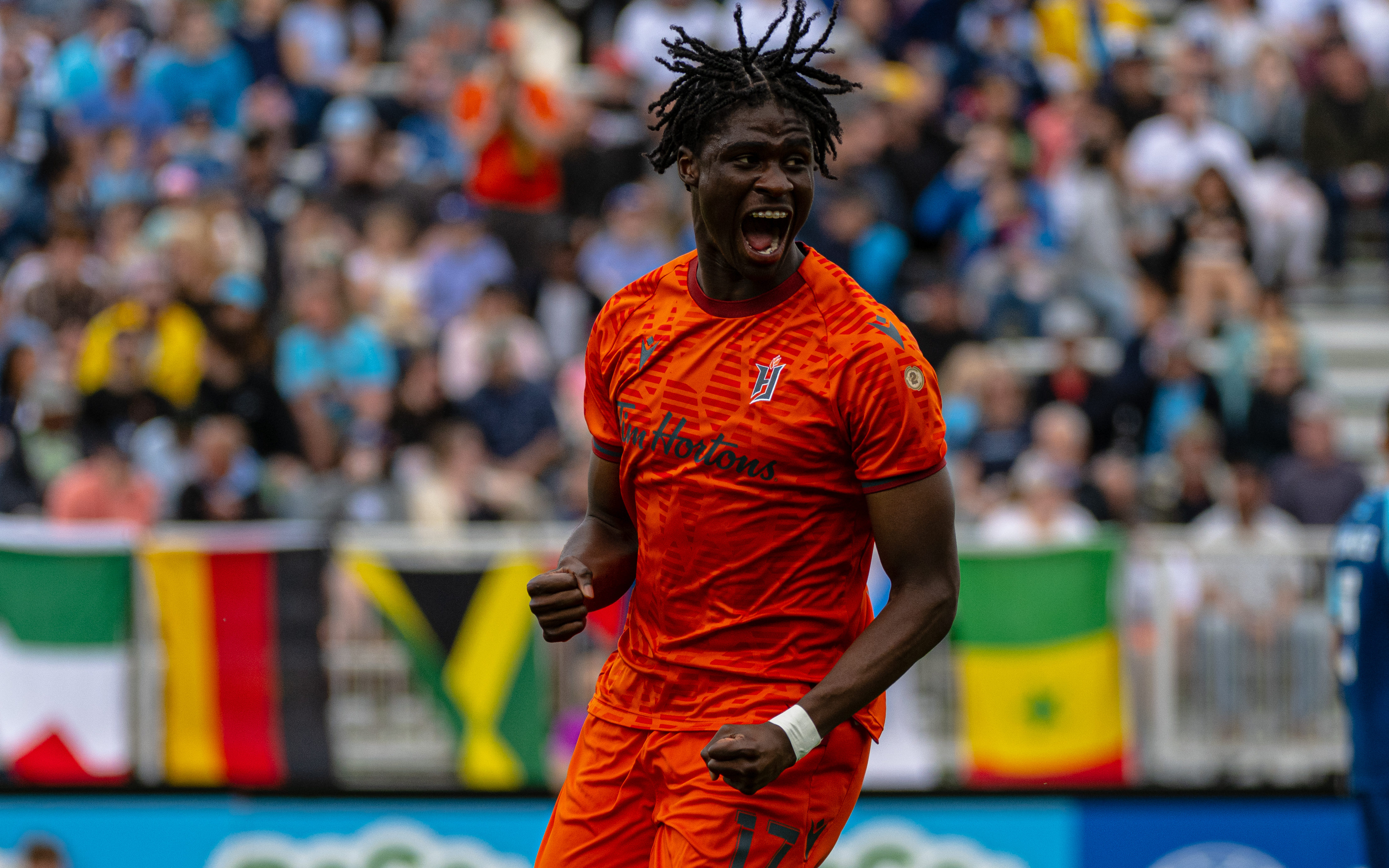 High-flying Forge FC won a fourth CPL match in a row on Sunday afternoon, beating HFX Wanderers 3-0 on the road at Wanderers Grounds.

Forge defender Rezart Rama was the first player to test their opposing goalkeeper in this match, firing a hard low shot at Christian Oxner from distance, forcing a diving stop from the Haligonian. It was the first of many shots he faced in this match, constantly under pressure and needing to be alert.

Forge were on the front foot for a lot of the opening 15 minutes, and took the lead on a strike from Woobens Pacius. His second match in a row with a goal, Pacius smashed home a half-volley after a pass into the box from David Choinière took a deflection on the way through. Rama and Choinière have linked up well since Rama joined the team, and that was on display again in the buildup to this goal.

Oxner made another huge stop a few minutes later, diving to his left to deny a hard shot from Aboubacar Sissoko and turn the ball away for a corner kick. Despite his best effort, he wasn’t able to deny Forge’s second goal, a first-time shot from Noah Jensen to fire the ball into the bottom left corner. Choiniere was again the provider, picking out Jensen with a low pass to his feet.

Another great pass into the box from David Choiniere sets up Noah Jensen to give @ForgeFCHamilton a 0-2 lead over @HFXWanderersFC in Father's Day #CanPL Action.👀⚽️

Cory Bent had the lone shot on goal for HFX in the opening 45 minutes, but Triston Henry was able to make the save. Sam Salter also came close on a couple of occasions, and Pierre Lamothe and Zachary Fernandez also took shots in the first half, but none of those four shots were on target. Forge took a deserved 2-0 lead into halftime.

The second half was a bit more scrappy than the first, with a trio of yellow cards handed out quickly after play resumed, but the fireworks made way for more exciting, free-flowing soccer.

Halifax had their second (and final) shot on target of the match in the 74th minute, but Triston Henry was able to turn away Alex Marshall’s effort.

In the 80th minute, a red card to Wanderers captain Mateo Restrepo halted any momentum his side had, sent off for denying a goal scoring opportunity. After Forge substitute Emery Welshman seemed to be through on goal, Restrepo reached out and pulled him backwards, and was given a red card as a result.

Welshman got his revenge a few minutes later, smashing a shot past Christian Oxner from six yards out to extend Forge’s lead to three. Terran Campbell, not long after coming off the bench himself, sliced through some Wanderers defenders before getting the ball to Welshman, who made no mistake from a few yards out.

Terran Campbell in his return walks the ball into the box to feed Emery Welshman, giving @ForgeFCHamilton a 0-3 lead over @HFXWanderersFC in #CanPL action.🔥⚽️

That would be the last major moment of the match, as Forge held on for a comfortable 3-0 victory — their second big win at Wanderers Grounds in recent times. With the win, they jump out to a three point lead over Halifax in the standings, making a bit of a cushion for themselves in fourth place, with HFX sitting in fifth.

The Hammers still have 2-3 games in hand over the teams above them in the standings, including Atletico Ottawa who will also play later on Sunday.